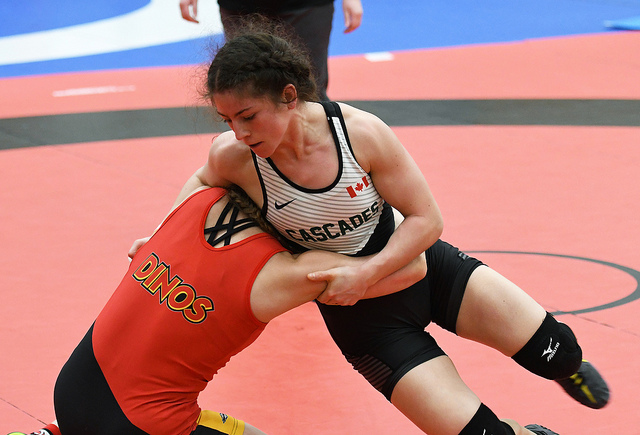 The University of the Fraser Valley men’s and women’s wrestling teams turned in an outstanding collective performance at the fourth annual Cascades Classic tournament, held Sunday at the Envision Financial Athletic Centre.

Team-wise, Saskatchewan Huskies took home the men’s and women’s aggregate banners. The Huskies amassed 47 points on the men’s side to edge the second-place Cascades (40 points). On the women’s side, Sask piled up 28 points to finish ahead of the SFU Clan (25), Calgary Dinos (20) and the Cascades (16).

The Cascades Classic served as a preview of sorts for the 2019 Canada West Wrestling Championships, which will be hosted by UFV for the first time in program history, Feb. 8-9.

“It teaches you what it’s like when a bunch of people are here to watch you,” Hildenbrandt said, reflecting on the benefit of hosting the Cascades Classic in such close proximity to the Canada West championships. “It’s different than going somewhere else where you don’t know anybody (in the crowd) and there’s a little less pressure.

“The Canada West tourney should be pretty fun – we’re hoping to pack the stands.”

Two-time U SPORTS national gold medalist Hildenbrandt had to come through it the clutch to win the men’s heavyweight division on Sunday. Trailing 4-1 in the second round against Ali Al-Rekabi of the Montreal Wrestling Club, Hildenbrandt scored on a pair of two-pointers in the final minute – the last one coming with just 20 seconds left on the clock – to prevail 5-4.

“I knew it would be the last minute or two where I was going to score all my points,” Hildenbrandt said. “The plan was to keep it close in the first round, and then allow my cardio that I work hard on to take over.”

Dhillon’s run to the 82 kg crown was less dramatic – he won all three of his matches either by pin or technical superiority. McBride went 2-0 to win the 57 kg class, defeating runner-up Pritpaul Johal of SFU by an 11-4 count.

Rahguzar and Sask’s Jacob Fritz were the only entrants at 61 kg, and the UFV grappler won both of their head-to-head matches by identical 10-0 scores.

On the women’s side, all three UFV competitors finished second in their respective weight classes. Reigning Canada West champ Ana Godinez Gonzalez won both of her matches in the 63 kg division by technical superiority, but withdrew prior to the final as a precautionary measure due to injury.

Amber Wiebe, likewise, won her first two matches at 55 kg by tech, before falling in the final to Calgary’s Tianna Kennett. Rookie Calista Espinosa showed tremendous growth on her way to second place at 48 kg.

The Cascades also participated in a dual meet on Saturday vs. the Saskatchewan Huskies, winning by a 40-19 score.

“Yesterday with the dual gave our athletes a sense of how the (Canada West) tournament’s going to be,” UFV interim coach Stacie Anaka said, alluding to the unique team-based schedule for the conference championship.

“I think everyone wrestled well today. Sleeping in their own beds is a little different than traveling. . . . We had a couple injuries, but those are what you deal with.

“A lot of our athletes scrambled well and kept fighting throughout, and learned things from their matches throughout the day.”