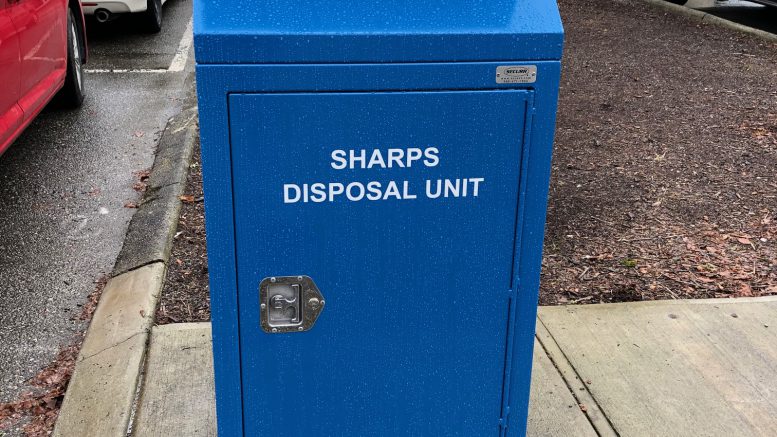 Chilliwack/Abbotsford/Mission/Agassiz/Hope – In 2016, to try to stem the flow of discarded needles in the downtown Chilliwack core, the yellow and green sharps boxes started to pop up.

But the thin plastic containers were easily vandalized and they were scrapped.

In December 2018, new Sky Blue coloured boxes, made of tougher material are now starting to show up. In particular, in the parking lot of the Chilliwack Business Centre, across from the Chilliwack Alano Club.

Kyle Williams of the Chilliwack BIA told FVN that this was in conjunction with the BIA, the City and Fraser Health.

The need to dispose of needles from practicing addicts has not diminished.

Chilliwack Mayor Ken Popove told FVN that Griffin Security has the contract to pickup those needles and turn them over to Fraser Health.

FVN reached out to Fraser Health and Griffin Security for comment. Griffin sent us back to the City and Fraser Health.

NOTE – Along with the three boxes in Chilliwack, there are two in Mission. At present there are none in Abbotsford, Agassiz or Hope. Abbotsford though, is under consideration.

If people need to return sharps in Agassiz or Hope, they can do so at the Public Health Unit in each respective community:

Also, some pharmacies take back syringes but suggest people call ahead to ensure that they do. For example, some may only take back ones that were purchased there.

Sharps are used by a diverse range of community members, including people with diabetes and other medical conditions, pet owners, and people who use illicit substances. We can keep all members of the community safe by providing easy access to sharps disposal units to appropriately dispose of syringes and needles.

Fraser Health has three large blue sharps disposal units in Chilliwack – two were installed in Fall 2017 (Chilliwack General Hospital and Chilliwack Public Health Unit) and one in Winter 2018 on Victoria Avenue.  These blue bins work much like a mailbox. You open up the drop slot and slide in either a sharps container or individual syringes for safe disposal. It can fit multiple sizes of sharps containers. There are currently no blue sharps disposal units in Abbotsford but there could be in the future.

In addition to the three large blue bins – which are part of Fraser Health’s larger regional sharps management strategy – the City of Chilliwack has installed smaller sharps containers in various parks and trail heads.

Inappropriately discarded sharps generate a level of concern in the community that is disproportionate to the actual risk they present. The risk of infection following a needle stick outside a medical setting is very low.

BC Coroners Service Investigating Death Of Nimrat Gill Of Abbotsford