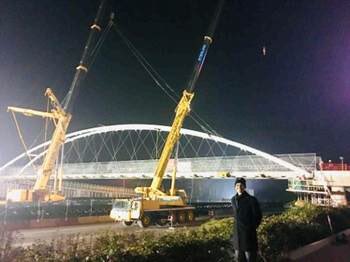 Fraser Valley – ‘Tis the time of year to reflect back on the past 365 days. In no particular order, this is what 2018 looked like through the eyes of FVN Fraser Valley News, and more important, YOU and the topics and stories that you wanted to know more about.

Chilliwack Chiefs host and win the RBC Cup in front of a sellout crowd at Prospera Centre and a national TV audience on TSN. At the end of 2018, Glen Ringdall resigned as President of the Chiefs and Prospera Centre. Chiefs Head Coach and General Manager Brian Maloney would take over those posts on top of his coaching and managing duties. Ringdall bought the BCHL Quesnel Millionaires and renamed them the Chiefs, to fill the void left by the departed (stolen) Chilliwack Bruins who left for Victoria in 2011.

Cannabis becomes legal. Dispensaries are set up on First Nations land but not in any Valley municipalities.

Huge brew tanks rumbled through the streets of Chilliwack, after a barge ride up the Fraser River, to their new home, the modern Molson Coors brewery in Chilliwack. The plant remains on track for a 2019 opening.

Homeless issues and housing. While new services and housing projects will go on line in 2019, the need/demand for housing continues to outpace the supply.

Abbotsford continues their 200K plan with a vision to revamp the two major malls on South Fraser Way , reconnect certain roads and eliminate parking for more retail and housing. Major re-design for the U-District (UFV) also in play. The bicycle/pedestrian ramp crossing Highway 1 to UFV is completed.

Abbotsford’s Algra Brothers receive the green light for the revamping of the dilapidated Chilliwack downtown core.

In Mission, the shovels were in the ground in the Spring, and the 1st Avenue facelift was underway.

Proportional Representation. Voters clearly stated that they wanted to stay with the first past the post voting system as the other alternatives seemed to be too confusing on the mail in ballot.

While work on improvements to the north and south portions of the Lickman Interchange started, the continued howl to Victoria to expand Highway 1 to six lanes, continues.

Flair Airlines gets off the ground including stops at Abbotsford International Airport.

Greyhound shuts down bus service and in the Valley, eBus rises to take its place.

Improvements to the approach on the Agassiz-Rosedale bridge and Highway 9.

Still no Uber or Lyft.(ride sharing)

Chilliwack resident Nick Cooper is deported. Cooper was noted for his one man army to combat racist graffiti. For whatever reason, his controversial past, which he made clear that he long since severed ties with racist groups in the UK, came back to haunt him. Ottawa would not change its mind and Cooper was deported.

The NEB dealt the Trans Mountain/Kinder Morgan pipeline a blow by sending the entire project back to the drawing board to address issues including marine safety and consultations with First Nations.

In June, without fanfare or giving the media a real heads up, Prime Minister Justin Trudeau shows up in Chilliwack (Cheam Reserve) to talk with the Indigenous Advisory and Monitoring Committee members. The Trans Mountain Pipeline and everyone’s involvement was the flash point. That included many protesters that caught wind of the visit.

Surrey Mayor elect Doug McCallum is back in that mayors chair and promptly directed the kill off of the LRT line in favour of Skytrain. He is spearheading the campaign to drop RCMP in favour of a civic police force. Abbotsford Mayor Henry Braun reminds McCallum (publically) of the inherit challenges that will being.

Harrison residents up in arms over a proposed gravel pit which is en route to the village.

Valley Huskers do something they have not done in a decade. A winning season and the National Coach of the Year.

Pro Basketball is coming to the Valley as the Fraser Valley Bandits and the CEBL announce their plans. Abbotsford will have one of the eight franchises.

Star FM opens their shiny new Chilliwack studio while 89.5 The Drive is purchased by the Jim Pattison Media Group.

chillTV debuts on YouTube with election coverage, the debates and the Chilliwack Rotary Parade.

Alan Asaph retires as the Executive Director of the Abbotsford Chamber of Commerce.

Abbotsford Centre will not get a new AHL team, as the Vancouver Canucks renew their agreement with the Utica (New York) Comets.

Abbotsford Centre was buzzing with great concerts (as they did not conflict with possible/hopeful hockey dates). The list included John Fogerty, Santana, Peter Frampton and Steve Miller.

2018 wrapped up with the clean up of a major December storm that was compared with 2015 (An August storm that created havoc for the PNE) and December 2006 (which cut down a swath of trees in Stanley Park).