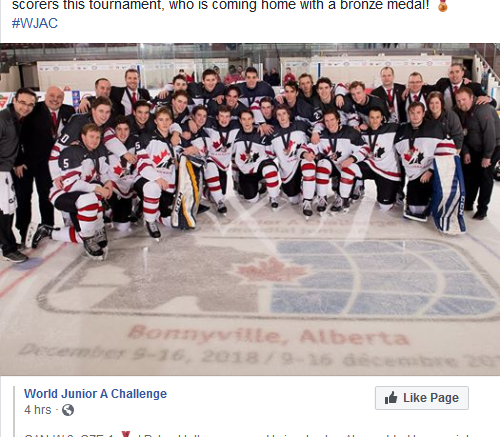 It’s the 10th medal in 13 years for West at the tournament, and second bronze – it also finished third in 2013.

Chilliwack Chiefs took to Facebook to congratulate one of their own who was on the team.

Congrats to our very own Harrison Blaisdell, one of Canada West’s top scorers this tournament, who is coming home with a bronze medal.

Ethan Leyh (Port Moody, B.C./Langley, BCHL) added the game-winning goal and Layton Ahac (North Vancouver, B.C./Prince George, BCHL) chipped in with two assists for the Canadians, who were on the ice less than 15 hours after their heart-breaking overtime loss to the United States.

Despite the short turnaround it was all West early; Holloway got it started at 1:52, banging his third chance past Czech goaltender Tomas Vomacka, and Leyh ripped home a one-timer at 7:16 to make it 2-0.

That was more than enough for Radomsky, who turned aside 33 shots through the first two periods and stopped the first 40 he faced before Michal Teply tipped in a Zack Malik shot with 6:16 remaining.

But Holloway got that back within two minutes, wiring a quick shot upstairs on Vomacka to restore the two-goal advantage and all but clinch the bronze medal.

Holloway, Leyh and Harrison Blaisdell (Abbotsford, B.C./Chilliwack, BCHL) finished as the leading scorers for the Canadians, posting five points each in six games.

Radomsky starred throughout the tournament; his 1.64 goals-against average .955 save percentage are the second-best marks in the tournament, both behind Russian netminder Yaroslav Askarov.

Chiefs Shut Out Grizzlies At Showcase