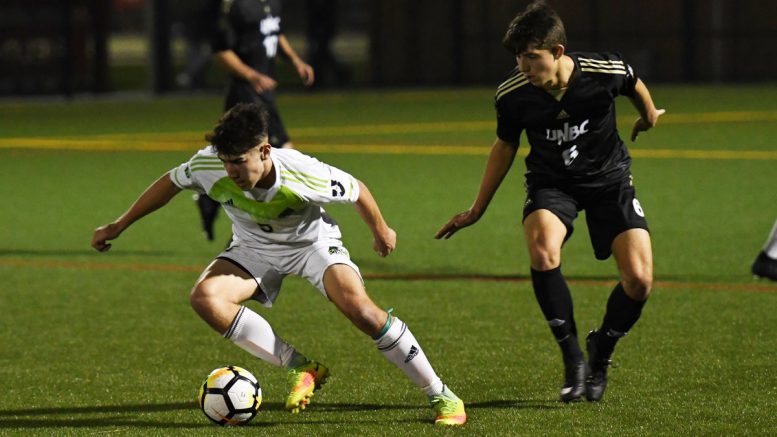 Abbotsford/Surrey – The University of the Fraser Valley men’s soccer program has added three outstanding recruits at positions of need in preparation for the 2019 Canada West campaign.

Surrey United teammates Jackson Cowx, Brennan Naiker and Navraj Purewal will join the Cascades next season, and the timing of their arrival is ideal. The UFV program is waving goodbye to three graduating players from its 2018 squad: a pair of goalkeepers (David Hicks and Alex Skrzeta) and an All-Canadian centre back (Tammer Byrne). Cowx is a goalkeeper, and Naiker and Purewal are centre backs – as such, they’ll instantly add competition for playing time and critical depth at those positions.

The trio join previously announced recruit Jehmrode Kahlon in the Cascades’ Class of 2019.

“They’ve been part of a very successful team – they won the Provincial Cup together and finished fourth at nationals this year at U17,” enthused UFV head coach Tom Lowndes. “We’re looking to replace some strong individuals who have graduated, and I’m excited about these players. They’re competitors, good technical players, and they fit into the culture of our program.”

Cowx was a standout at the Metro level for Surrey United, winning league MVP honours in 2016 before earning a permanent spot with SUSC’s BC Soccer Premier League (BCSPL) side. He backstopped the team to a provincial title and a fourth-place finish at the national championships, turning heads with a pair of penalty-kick stops at nationals.

“He’s a highly touted goalkeeper who’s been fantastic over the past 12 months,” said Lowndes, who compared Cowx to outgoing Cascades starter Hicks in terms of physical attributes and style of play. “He’s very agile, a great shot-stopper, and good in his distribution. We’re very pleased we’ve been able to sign him to come here. He’ll compete for the starting spot right away.”

As for his academic path, Cowx is choosing between kinesiology, general studies and criminology.

“The program has a great atmosphere,” said Cowx, explaining his decision to sign with the Cascades. “I know both coaches really well, and once I found out UFV was interested in me, I was 100 per cent willing to come here. I want to improve a lot during my time here, and make it to the next level and play professionally after I’m done.”

Naiker experienced a great deal of success with Surrey United’s BCSPL side – he won provincial titles at the U14 and U17 levels, winning a U14 national silver medal and adding a U17 fourth-place finish at the 2018 nationals. Prior to that, he won a U13 Metro championship and was league MVP. Naiker also excelled for his school soccer team, helping his Fleetwood Park Dragons to a fifth-place finish at AAA provincials last season and earning team MVP honours each of the past two years.

“He’s very athletic, a smart player, physical, and really looks to lead from the back,” Lowndes said. “He’s good in the air, and he’s everything we want our centre backs to be. I’m excited to see him transition to U SPORTS soccer and compete for playing time right away.”

In addition to being a blue-chip soccer recruit, Naiker is a strong student who plans to begin his academic career in kinesiology at UFV and eventually move on to med school.

“I’ve had Mike (Newton, Cascades assistant coach) as a coach in youth soccer before, and he was one of my best coaches because he connected with me on a personal level and he improved my game by a huge margin,” Naiker said. “And I know Tom from Surrey United.

“I know it’s going to be way more fast-paced in university soccer, and the physicality of this level is up there. But I can adapt quickly.”

Purewal won a trio of BCSPL championships with Surrey United, winning it all at the U13, U14 and U17 levels and adding the aforementioned silver-medal (U14) and fourth-place (U17) finishes at nationals. He’s earned a reputation as a player who blends a solid technical approach to the game with a fierce competitive streak.

“Physically he does very well, and he has a good range of passing and a lot of energy,” said Lowndes, who believes Purewal has the versatility to also line up at fullback at the next level. “I expect to see him come in and compete for some playing time immediately.”

While Purewal is still deciding on his area of post-secondary academic study, he’s had cousins who attended UFV previously and attested to the quality of education he’d receive. That factored into his decision to sign with the Cascades.

“They’ve got a great soccer team here,” he noted. “It’s going to be hard adjusting the university soccer, but I’ll work through it and give it all I’ve got. I want to accomplish big things in soccer.”