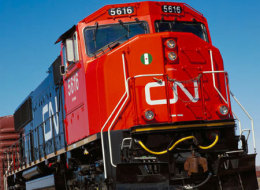 Montreal/Fraser Valley (with files from CP)— Canadian National Railway is laying off some non-unionized workers, less than three weeks after the company reported the highest quarterly revenues in its 99-year history.

No locomotive crews or front-line employees were affected, but held off on explaining what prompted the move.

CN Rail declined to say how many consultants, contractors and managers face dismissal, saying that a “small percentage” of non-unionized workers were let go.

Affected management employees were notified last Friday. The Teamsters Canada union confirmed it had not been informed of any layoffs for its members.

The Montreal-based railway earned a net income of $1.13 billion in the quarter ending September 30, an 18 per cent year-over-year increase. Revenues ramped up to $3.69 billion, however that windfall came partly as a result of $48 million in land sales and higher pricing for coal, lumber and petroleum and chemicals.

CN Rail is the line that cuts through Chilliwack.

CP Rail is the line that goes through Agassiz and carries the Annual Christmas Train.