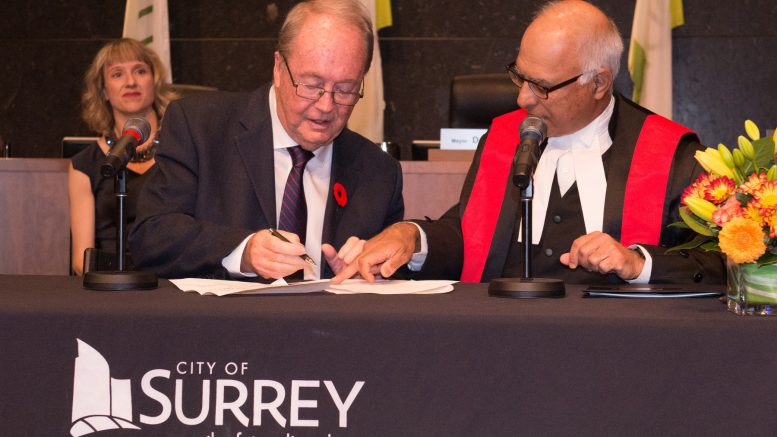 Surrey  – Mayor Doug McCallum and the new members of Surrey City Council officially took the Oath of Office at an inauguration ceremony held Monday evening at City Hall. Immediately after being sworn into office, Surrey City Council convened a Regular Council meeting where a motion was introduced and passed to cancel the Surrey Newton Guildford LRT project and to begin work on extending the existing SkyTrain network in Surrey from King George Station to Langley City.
Council also approved a motion to start work on creating a Surrey Police Department and serve notice to the Federal and Provincial governments that the City of Surrey will be terminating its contract with the RCMP municipal police service.
“What City Council has done is immediately deliver on the wishes of the people of Surrey,” said Mayor Doug McCallum. “It was very clear to me that with all the people I spoke to and heard from that SkyTrain and Surrey establishing its own municipal police force are what is best for our city. As the elected representatives of the citizens of Surrey, we are delivering not just what we promised to do, but we are acting on what the people have said would be best for their city.”
Abbotsford Mayor Henry Braun has been one of many politicians cautioning Surrey to take it slow on replacing the RCMP with a local force. Braun had publicly echoed concerns about the transformation process, which is not a slam dunk and must start with a two year transition period.
The Skytrain instead of LRT debate is also heated but not as eye brow raising, as Prime Minister Justin Trudeau has gently agreed to “what the transportation needs” would be for Surrey. The Federal money is there for either project although Mayor McCallum is not backing away from the Skytrain option.
Photos Courtesy City of Surrey: 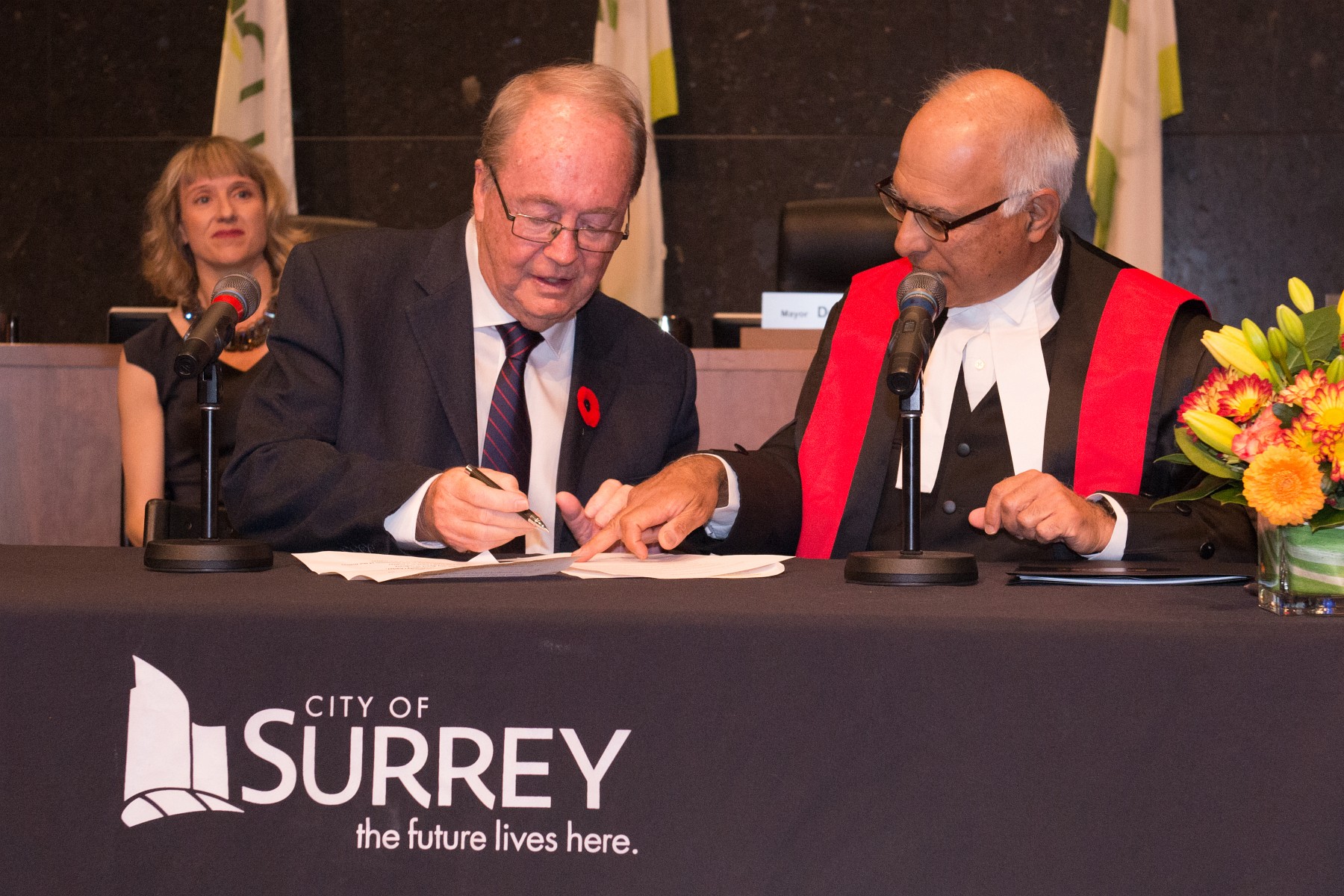 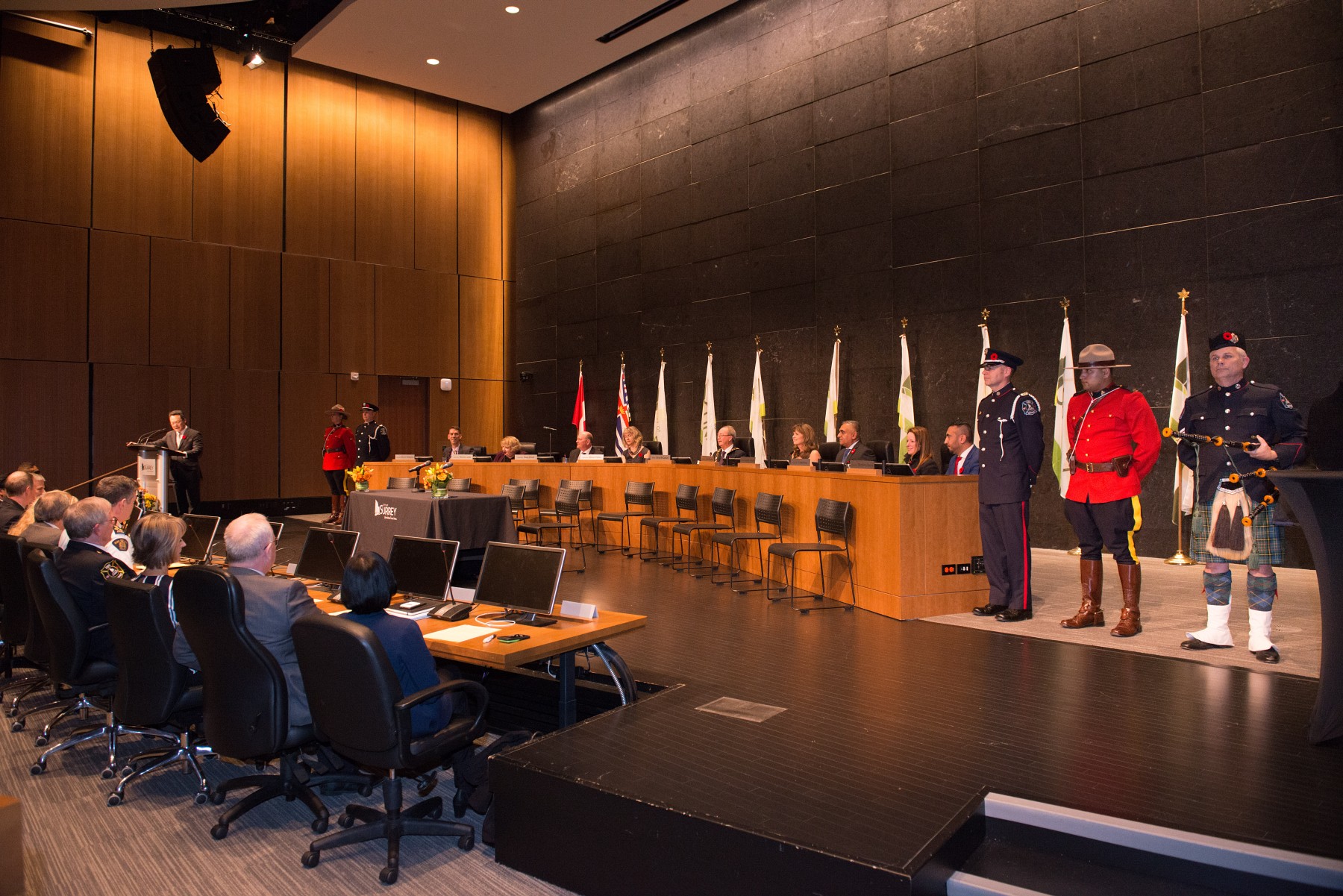 Chilliwack Robbery Ends Up In Coquitlam

Be the first to comment on "City Of Surrey – Inauguration Of New Mayor, Council -Takes Steps To Replace RCMP, LRT"