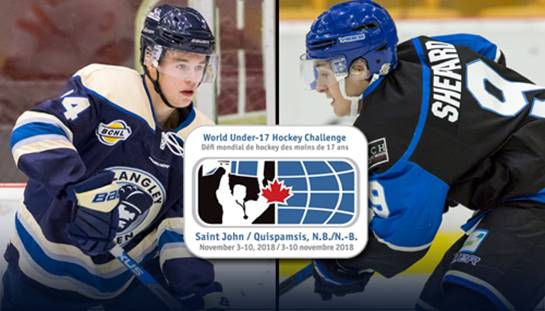 Langley/Calgary/Penticton – Hockey Canada announced the rosters for the 2018 World Under-17 Hockey Challenge and two BCHL players have landed roster spots.

Canada will be sending three teams to the tournament which goes from November 3 to 10 in Saint John and Quispamsis, N.B. Team Canada Red, Black and White will compete for gold against the Czech Republic, Finland, Russia, Sweden and the United States.

“After an exciting summer camp with 112 players gathering in Calgary and the selection of our 66-player roster last week, the unveiling of our three teams is one of the final stages as we prepare for the World Under-17 Hockey Challenge,” said Hockey Canada head scout Brad McEwen. “We are fortunate to be able to assemble three competitive, skilled teams and we believe all 66 players will represent their country with pride in this prestigious event.”

Helliwell is in his first full BCHL season after playing in one game as an affiliate with the Rivermen last year. The 16-year-old native of Vancouver has seven assists in 14 games this season.

Shepard, from West Vancouver, is also in the midst of his first full season in the league after getting into two games with the Vees last year. He has three assists so far this season as a 16-year-old.

TSN and RDS will broadcast both semifinal games November 9 as well as the championship game November 10.

Chiefs Explode In Third – Come From Behind Win In Langley