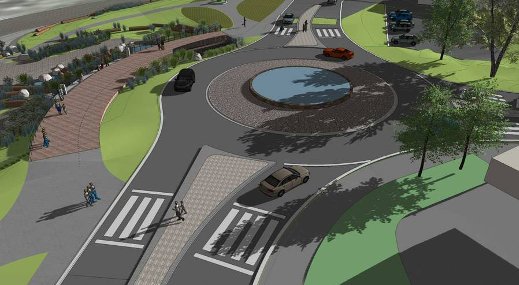 Change is good, that is unless the town wants to upgrade a busy T intersection with a roundabout rather than installing traffic lights. This is the situation in Qualicum Beach where the town has announced that it intends to rebuild the intersection of highway 19A (Island Highway West) and highway 4 (Memorial Avenue) using a roundabout. This is something that the Qualicum Beach Residents Association (QBRA) opposes.

The collision picture here is a quiet one, relatively speaking. ICBC says that between 2011 and 2015 there were 19 crashes at the intersection and only 3 of them included injuries. There is mention by both the town and the QBRA of a pedestrian fatality close by in the recent past but there is no indication of how close or if the fatality was related to the intersection itself.

The QBRA wants traffic lights installed at this intersection instead of a roundabout and wrote to the Ministry of Transportation and Infrastructure to register opposition to this portion of the project.

The number of signatures on the petition amounted to about 10% of the town’s population, but there was no indication of whether the petition was limited to residents of the town or not.

Will the desires of the QBRA prevail?

The current design guide used by the province indicates on page 139 that:

Roundabouts shall be considered as the first option for intersection designs where 4-way stop control or traffic signals are supported by traffic analysis. If an intersection treatment other than a roundabout is recommended, the project documentation should include a reason why a roundabout solution was not selected for that location. This roundabouts “first” policy supports the province’s Climate Action Program of 2007.

Why are roundabouts considered to be the best option? They have a high potential for safety:

The most commonly raised concerns involve pedestrians and cyclists.

Of the two, the pedestrian receives more benefits. They now only have to cross one lane at a time with a refuge in the splitter island half way across. Marked crosswalks are set away from the circle. This means that pedestrians are not crossing directly in front of drivers busy looking for a gap in traffic.

Cyclists trade a slightly increased collision rate for conditions that make those collisions much less likely to result in significant injury or death.

To summarize, roundabouts have been shown to reduce total crashes by 39%. serious crashes by 76% and fatal or incapacitating injuries by 89% when compared to intersections with stop signs or traffic lights.

DriveSmart BC – Almost Is NOT Good Enough – Stay Between The Lines

DriveSmart BC – It Looked Like A Drunk Driver To Me

DriveSmart BC – To See, Or Not To See – Tinted Windows

Be the first to comment on "DriveSmart BC – Resistance To Roundabouts"