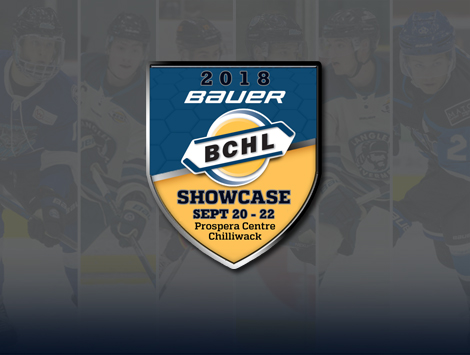 Chilliwack – The matchups are all set for the 2018 Bauer BCHL Showcase as all 17 BCHL teams will gather for 17 regular-season games during the third week of the schedule.

Again, Prospera Centre in Chilliwack will play host and this season’s event will take place over three days – Sept. 20, 21 and 22. This year’s event is the seventh consecutive Showcase the BCHL has held.

Unlike last year, both sheets of ice will be used at Prospera Centre which will allow the event to be run in 72 hours rather than the five days that it took last year using only the main arena.

Each team will play two games that count in the standings and the event is expected to attract serious attention from members of the NHL and NCAA scouting ranks. Each Showcase to date has seen almost all NHL teams and the majority of NCAA teams represented with as many as 200 scouts attending in all.

The schedule for this year’s Showcase is as follows:

Stuff A Truck For Salvation Army In Chilliwack May 30th

BikeBC Funding To Expand And Build Cycling Lanes, Trails And Paths Including Chilliwack