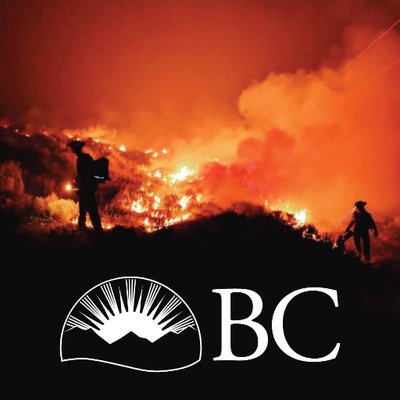 Fraser Valley – As we go through a cool down from the long heat wave (longest since 2009 with 10 days of over 30C) that doesn’t ean wildfire season is slowing down.

There have been a few highway grass fires caused by tossed cigarette butts. The situation in the interior is far more dire. Lightning sparked from the weather change is causing havoc.

24 hours of lightning strikes have triggered 300 fires. The Valley has been spared for the most part this tear. The Okanagan continues their watch especially near Cawston, Karemeos and rural Kamloops, and some focus has shifted to the Prince George Fire Centre and the Cariboo.

Weather models for the Fraser Valley are hinting that after the long weekend (BC Day) we could be in for another prolonged heat wave.

We're starting to see an uptick in #BCwildfire activity across #BC as a result of recent lightning. Pictured below is where it has struck over the past 24 hours.

Yesterday alone, 132 new wildfires started. As of this morning there are 305 fires across BC that we're responding to pic.twitter.com/G9MWnY2l5L

Precautionary Evacuation Alert for Cawston and Keremeos area due to Snowy Mountain Fire. 481 properties included. No Evacuation Orders at this time. https://t.co/vZuXsfNzqy pic.twitter.com/TzXBRy8wEP

The BC Wildfire Service is responding to multiple lightning caused fire starts in the Nadina fire zone. Two major fires are the Nadina Lake Fire which is ~380 has, and the Verdun Mountain Fire which is ~52 has. See our interactive wildfire map for info: https://t.co/u6qFA4Bgxl

(1/3) We're responding to 21 new fires in the Prince George Fire Centre (northeastern #BC) today. The fires are being assessed and will be actioned in priority sequence. Ground crews, helicopters, airtankers and heavy equipment are responding. #BCwildfire

Air Quality Advisory Back Up For Fraser Valley