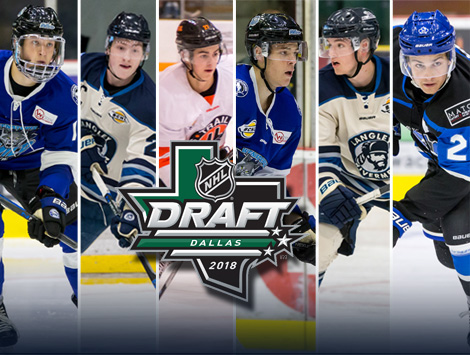 Dallas – American Airlines Center in Dallas is the host venue for the 2018 NHL Entry Draft and it could be a memorable locale for several BCHL players should they make it to the Show one day.

Since the NHL went down to seven rounds in the draft in 2005, the most BCHL players selected directly from the league is seven which happened in both 2007 and 2013. It’s a good bet several of the names listed below will be called and maybe even a few players that weren’t listed.

Here is a look at the top BCHL prospects for 2017-18 as they ready themselves for what could be a life-changing couple of days.

Ty Taylor – Vernon Vipers – 6-foot-3, 200 pounds – DOB July 7, 1999
NCAA commitment: New Hampshire – Hockey East
Having been eligible for last year’s draft, a bit of a longer shot to get taken but his size gets your attention. Posted a phenomenal season with seven shutouts, and a .931 save percentage. Won the BCHL Top Goaltender Award.
Listed No. 25 among North American goalies by Central Scouting

Jonny Tychonick – Penticton Vees – 6-feet, 180 pounds – DOB March 3, 2000
NCAA commitment: North Dakota – NCHC
A good bet to win the inaugural John Grisdale Awards as the highest-drafted CJHL player, Tychonick has been listed as a possible late first-round selection in some mock drafts but is pegged as an early second-rounder by most. His close friend and fellow North Dakota commit Jacob Bernard-Docker of the AJHL’s Okotoks Oilers could spoil his Grisdale bid but the two will probably be taken in quick succession. Tychonick is a great skater and superior puck-mover, allowing him to smartly move the puck out of his own end and get on the attack.
Listed No. 36 among North American skaters by Central Scouting

Seth Barton – Trail Smoke Eaters – 6-foot-2, 175 pounds – DOB August 18, 1999
NCAA commitment: UMass-Lowell – Hockey East
Barton’s birthdate made him eligible for last year’s draft but by less than a month so he’d fit the tag of more of a late bloomer. He was one of three BCHL players, along with Tychonick and Demin, invited to the pre-draft fitness combine in Buffalo and showed extremely well finishing in the top quarter of six different categories. Performed well in Trail’s playoff run.
Listed No. 94 among North American skaters by Central Scouting

Angus Crookshank – Langley Rivermen – 5-foot-11, 181 pounds – DOB October 2, 1999
NCAA commitment: New Hampshire – Hockey East
Crookshank’s late birthday (past the Sept. 15 cutoff) makes him draft eligible for the first time this year and don’t be surprised if a team jumps on him in the middle rounds. Consistently generates offensive opportunities and is strong on his skates, making it hard to bump him off the puck. Produced consistent offence and some big goals in helping Canada West to gold at the World Junior A Challenge in December.
Listed No. 135 among North American skaters by Central Scouting

Brendan Budy – Langley Rivermen – 5-foot-11, 180 pounds – DOB June 6, 2000
NCAA commitment: Denver – NCHC
Built similarly to his teammate Crookshank, Budy has proven a good setup man whose game plays wonderfully on the man advantage. At ease making plays on the backhand as well as forehand, his vision is superior and he regularly finds teammates for scoring chances. Led Langley in scoring this season and was the team’s captain.
Listed No. 125 among North American skaters by Central Scouting

Brett Stapley – Vernon Vipers – 5-foot-10, 170 pounds – DOB February 23, 1999
NCAA commitment: Denver – NCHC
Already a long-serving BCHL veteran of three campaigns, Stapley became more of a finisher this season. His quickness in processing the game and his smarts allow him to overcome any questions on his size. Superior skating and playmaking ability make him an offensive threat any time he gets the puck.
Listed No. 177 among North American skaters by Central Scouting