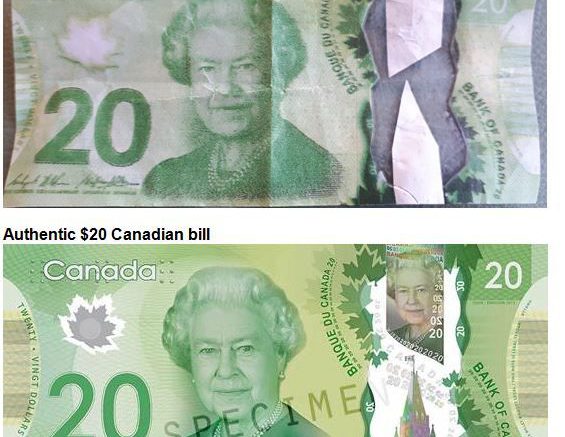 Abbotsford – It’s that time of the year when it’s easy to head to events and summer holiday gatherings and…pass a bad bill.

Abbotsford Police are asking you to keep an eye out for counterfeit $20 Canadian bills currently circulating in Abbotsford. 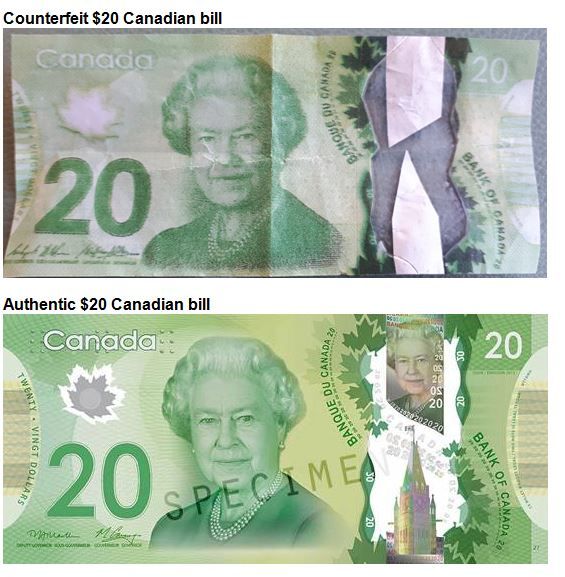 Fraudsters are creating fake bills by taping clear plastic “hologram” panels into computer-printed “bills”, and passing them to local businesses. Businesses are likely to be targeted during busy periods or when less experienced staff is working.

·         Feel the bill; counterfeit currency is rough whereas the authentic polymer bill is smooth.

·         Ensure that the edges of the bill are straight and that it has the same dimensions as other bills; fake bills are often poorly cut and are not of uniform size.

·         Images on the bill should be crisp and well-defined; the images on counterfeit bills are sometimes unclear.

What to do if you suspect you are accepting a fraudulent bill during a transaction:

·         Politely refuse the bill, explaining that you believe that it may be counterfeit.

·         Advise the person in possession of the bill to check it with the bank or the police.

When requesting an alternate bill, be polite; the person in possession of the bill could be an innocent victim who does not realize that the bill is counterfeit.  Only ask for an alternate bill if you feel doing so wouldn’t put you at risk.

What to do if you suspect that a note is counterfeit after a transaction:

Check the bill with your bank or police department. If it’s real, you’ll get it back.

What you can do to stop the flow of counterfeit currency:

Take a few moments when exchanging cash to check your bills for authenticity. Once a fraudulent bill has changed hands, the responsibility to surrender the bill to the bank or to the police lies with the holder.  Unfortunately, those surrendering counterfeit bills will not be reimbursed – the best defence against this type of fraud is vigilance at the time of the transaction. It is an offence to knowingly transact further business with counterfeit currency.