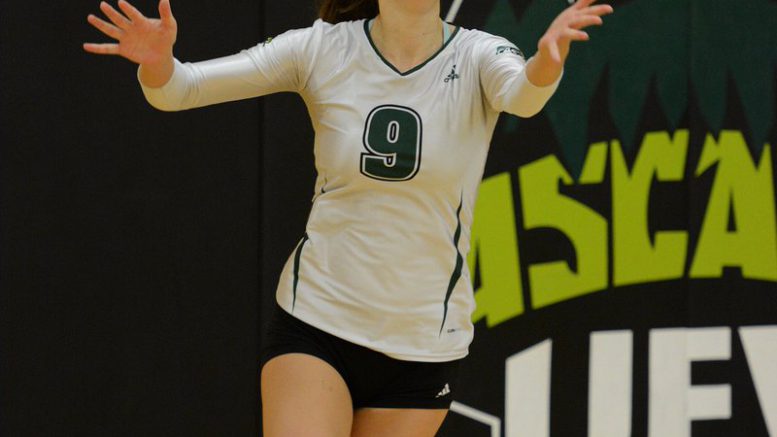 The University of the Fraser Valley men’s volleyball team eliminated their crosstown rivals from playoff contention in dramatic fashion, winning a five-set thriller over the Columbia Bible College Bearcats on Saturday evening.

Playing at Columbia Place on the last night of the PACWEST regular season, the stakes were high for the host Bearcats. Beat the Cascades, and they would leapfrog the sixth-place College of the Rockies Avalanche for the PACWEST’s final playoff berth. Lose, and their season was over.

The Cascades’ post-season berth was already secure, and they were coming off a four-set win over the Bearcats at UFV on Friday. They picked up where they left off in the rematch, winning the first two sets in decisive fashion, 25-18 and 25-17, to push the Bearcats to the brink.

But CBC, with their home crowd roaring its approval, had a strong finish to the third set to take it 25-21. Then they controlled the fourth, winning 25-12. In the fifth, they built a 13-9 lead – just two points away from punching their ticket.

The Cascades, though, answered with five straight points with Carter Bronson at the service line to go up 14-13. Bronson’s run finally ended when he served into the net, but UFV scored the next two points to seal the victory. After right side Graeme Hughes’s kill down the line gave the Cascades a 15-14 lead, the final point came with some controversy. A CBC attack was out of bounds beyond the end line, but the Bearcats felt it had gone off the hands of UFV’s blockers and were stunned they didn’t get the call.

In the end, the Cascades (12-12) will be the No. 4 seed at next week’s PACWEST conference championships, which will be held at UFV’s Envision Financial Athletic Centre (Feb. 22-24). UFV takes on No. 5 Douglas (11-13) in quarter-final action on Thursday at 8 p.m. The earlier men’s quarter-final (3 p.m.) will feature the No. 3 Camosun Chargers vs. the No. 6 College of the Rockies (5-19). The Bearcats finish their campaign seventh in the PACWEST at 4-20.

“Our guys battled to earn a win against a team that was obviously very desperate to get that one,” Cascades head coach Kyle Donen said, reflecting on Saturday’s result. “It was an emotional finish, for sure, and it was a good learning experience for our young guys.”

Donen elected to make liberal use of his young players off the bench on Saturday – Nick Bruce, the team’s leader in kills and total offence, only played the first three sets. After tripping at the finish line in the third set and struggling throughout the fourth, the Cascades – with rookies Lucas Mantel (left side) and Ian Jagersma (middle) on the floor – found their groove late in the fifth. Mantel notched three kills and two pivotal blocks in parts of three sets.

“I thought we were really in rhythm, playing well in the first two sets and into the third before we started to struggle there,” Donen said. “But I feel good about our game and good about what we’re doing going into the championships next week. We’re excited to be in a playoff atmosphere in our own gym. It’s hard to put into words, but needless to say, we can’t wait for that opportunity.”

Ben Friesen paced the Cascades with 15 kills, and Bruce notched 12 in his limited playing time. Libero Evan Bell-Foley was backbone of the defence with 11 digs.

The win marked a career milestone for Donen – the fourth-year head coach earned his 50th victory in PACWEST regular-season play. 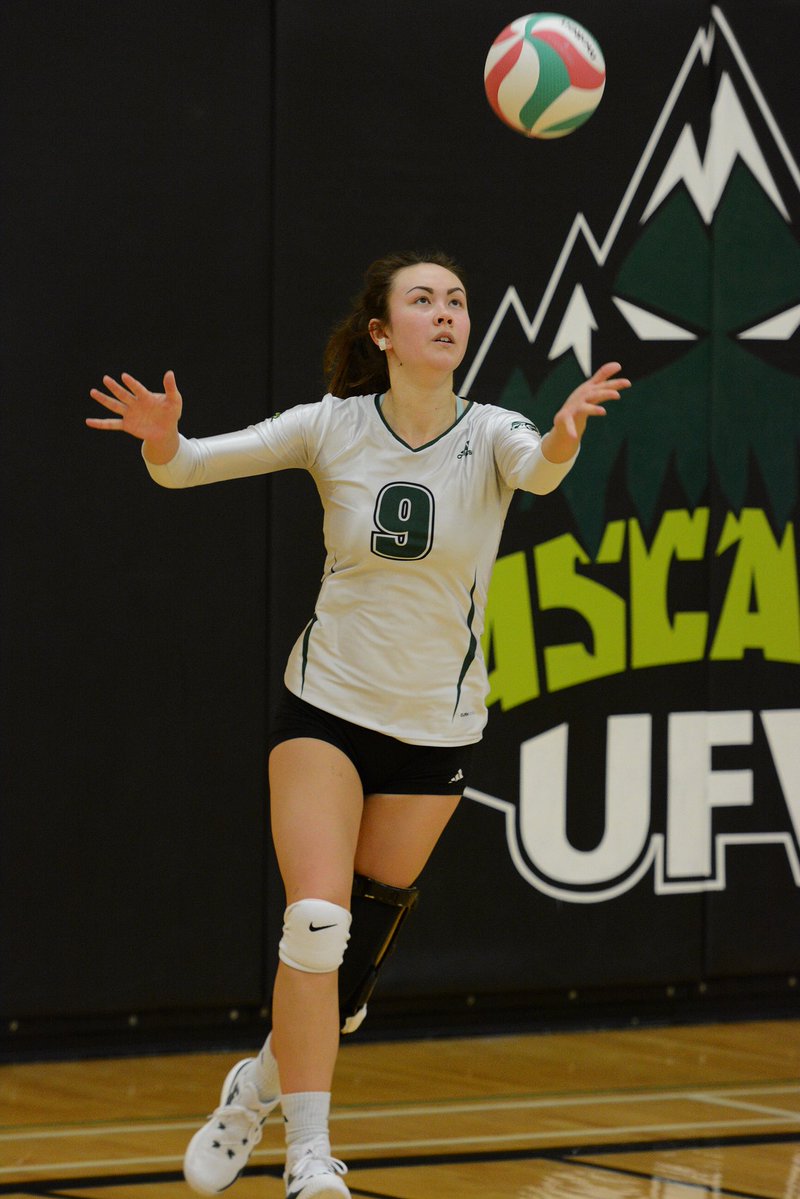 The University of the Fraser Valley women’s volleyball team closed the book on the regular season with a five-set road loss to the Columbia Bible College Bearcats.

The match was distinguished by sharp momentum swings – neither team won two sets in a row, and none of the sets was particularly close save for the fifth. But even that one was a microcosm of the match as a whole. The Cascades dominated the first half, leading 8-4 following a Kim Bauder service run, but the Bearcats answered with a 9-1 run of their own behind the serving of Jodi Enns and clinched the victory.

Both teams have qualified for the PACWEST conference championships, which will be held at UFV’s Envision Financial Athletic Centre next week, and Saturday’s result did not impact either team’s seeding. The host Cascades (13-11) will be seeded No. 3, and they’ll face the No. 6 College of the Rockies Avalanche (7-17) in the quarter-finals at 6 p.m. next Thursday. The No. 5 Bearcats (11-13) will take on the No. 4 Capilano Blues (13-11) at 1 p.m. Thursday.

“It was funny – one side of the court won every set by a substantial amount,” he said with a chuckle, noting that the team on the side furthest from the main entrance doors at Columbia Place prevailed in each set. “I don’t think either coach is going to be happy with the consistency of their team. There were spots of brilliance from both sides, but I think both coaches would rather see consistency. For us, the negative was not having everybody going at the same time.

“We just couldn’t get all parts of the game rolling at once. It’s frustrating, for sure, but a good learning opportunity going into next week. There’s always more to learn from a loss, and in the playoffs, you expect those five-setters.”

Left sides Kim Bauder (12 kills) and Amanda Matsui (11 kills) were the Cascades’ highest-volume offensive contributors, and middle Keira Fisher had an efficient night with eight kills on 38 per cent hitting. Olivia Heinen had 44 set assists, and joined Bauder and Cassidy King in posting double-digit digs. Kara Williams made a strong contribution off the bench, coming in at right side and giving UFV a boost defensively.