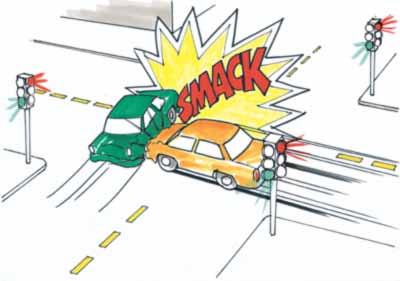 If you have been following the news this week you will know that the Capital Regional District Traffic Safety Commission has proposed time over distance speed cameras in an attempt to reduce serious collisions on the Malahat Highway. One result of this has been a discussion on Twitter about whether this is a justifiable solution or not.

The provincial government is willing to entertain the idea and has done a road safety analysis on that section of the Trans Canada Highway. The last page of that report lists the 12 most common first contributing factor reported by the police and shows that the top three are driving without due care and attention, speed and weather.

No numbers are given, just that they form about 35% of total injury and fatality crashes.

I’ve completed many MV6020 collision reports in my career. I know that the form allowed me to list up to three contributing factors for a collision in descending order of importance. The choice of these factors by police are based on investigation, experience and opinion. They can also be subjective.

From my experience investigating collisions, both driving without due care and weather most often have a speed component, whether it be speed over the limit of speed relative to conditions.

Many other factors may have a speed component as well. What is recorded primarily as following too closely could be part of an attempt by the offending driver to bulldoze the vehicle in front out of the way so that they can continue their trip at a speed in excess of the limit.

The government removed the requirement to report a collision to police from the Motor Vehicle Act in July 2008. I suspect that this has made determining the cause of minor collisions even less accurate than it was prior to that date. To some extent, knowing about minor collisions is important in predicting the potential for major collisions.

Major collisions are most often investigated by experienced traffic officers along with collision analysts and reconstructionists. These are well documented and reported. Serious injury and fatal collision data with speeding involvement numbers should be reliable.

If you want to know where the collisions are occurring, you can visit ICBC’s crash maps and select Malahat. You will find that there were 27 casualty and 52 property damage only crashes from 2011 to 2015. A small number perhaps, unless you are one of those numbers or find yourself waiting in traffic for them to be cleared.

For what it’s worth, I think that you can reasonably assume that speed is a contributor to crashes on the Malahat from this and that along with the current highway improvements point to point speed cameras could make a positive difference. We should try.

DriveSmart BC – How Long Should A Highway Be Closed In The Event Of A Serious Crash?

DriveSmart BC – Staying On Your Side of the Road – “S” Curves

Be the first to comment on "DriveSmart BC – What Causes Crashes & How Do We Know?"