Victoria/Fraser Valley – More than 1,400 British Columbians died due to suspected illicit drug overdoses in 2017, according to data released by the BC Coroners Service.

Fraser Valley Numbers are included below: 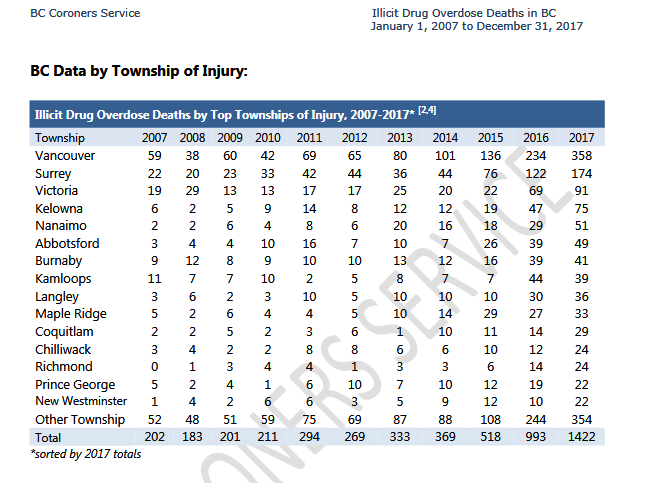 Preliminary data indicate there were 1,422 suspected drug overdose deaths in 2017, representing a 43% increase from 2016, when there were 993 overdose deaths. There were significantly fewer deaths, however, in the last four months of 2017 (average of 96.5 deaths per month from September to December) compared with the first eight months of the year (average of 129.5 deaths per month).

Approximately 81% of the suspected illicit drug deaths to date in 2017 had fentanyl detected, up from 67% in 2016. In most cases, fentanyl was combined with other illicit drugs, most often cocaine, heroin or methamphetamines. Carfentanil has been detected in 64 suspected illicit drug overdose deaths between June and December of 2017. The majority of deaths continue to occur in private residences.

Latest report on deaths in which fentanyl was detected:
http://www2.gov.bc.ca/assets/gov/public-safety-and-emergency-services/death-investigation/statistical/fentanyl-detected-overdose.pdf

POLL – BC Residents Not Ready To Legalize Fentanyl, Heroin and Cocaine… but we LOVE our Pot!