Live stream footage from today's first annual Fraser Valley Women's march. Thanks to everyone that participated!

Live stream footage from today's first annual Fraser Valley Women's march. Thanks to everyone that participated!

On January 20, 2018, millions will march again in cities around the world and Ann Davis Transition Society and the University of the Fraser Valley are encouraging all to come out to support this important 1st annual Women’s March Fraser Valley Event.

The march will be from the Ann Davis Transition offices at 9046 Young Rd. to Chilliwack City Hall at 8550 Young Road Starting at 11 AM to 1 PM.

On the day of the march, bring your sign or build one on site with materials provided. http://www.womensmarchcanada.com/women_s_march_canada_chilliwack_2018 this event will be live streamed.

Recent events have shown that now is an important moment to come together to push for social justice for the most marginalized and oppressed among us.

The Women’s March is an important tactic for unifying our communities in order to create change. Now is the time to show resistance and solidarity. We must not rest until women have equity, justice and parity at all levels of leadership in society. Across the province domestic violence numbers are rising, in Chilliwack we have 37% of homeless being women, much higher than anywhere else, come out and be a part of making a difference in bringing awareness and education to these and other important issues.

From coast to coast to coast there are Marches happening across Canada.  Ann Davis Transition Society and the University of the Fraser Valley are encouraging all interested community members that would like to see women and girl’s rights supported to attend and unite for the protection of women’s rights, safety, health, access and representation.

The march will be from the Ann Davis Transition offices at 9046 Young Rd. to Chilliwack City Hall at 8550 Young Rd. Everyone is welcome! Join us to march for women’s rights in the Fraser Valley. Speakers include Joanne Gutierrez – Hugh (Xwiyolemot) former tribal chief with Sto:lo Tribal Council, Jackie Hogan, University of the Fraser Valley  acting president; and Patti MacAhonic Ann Davis Transition Society executive director. 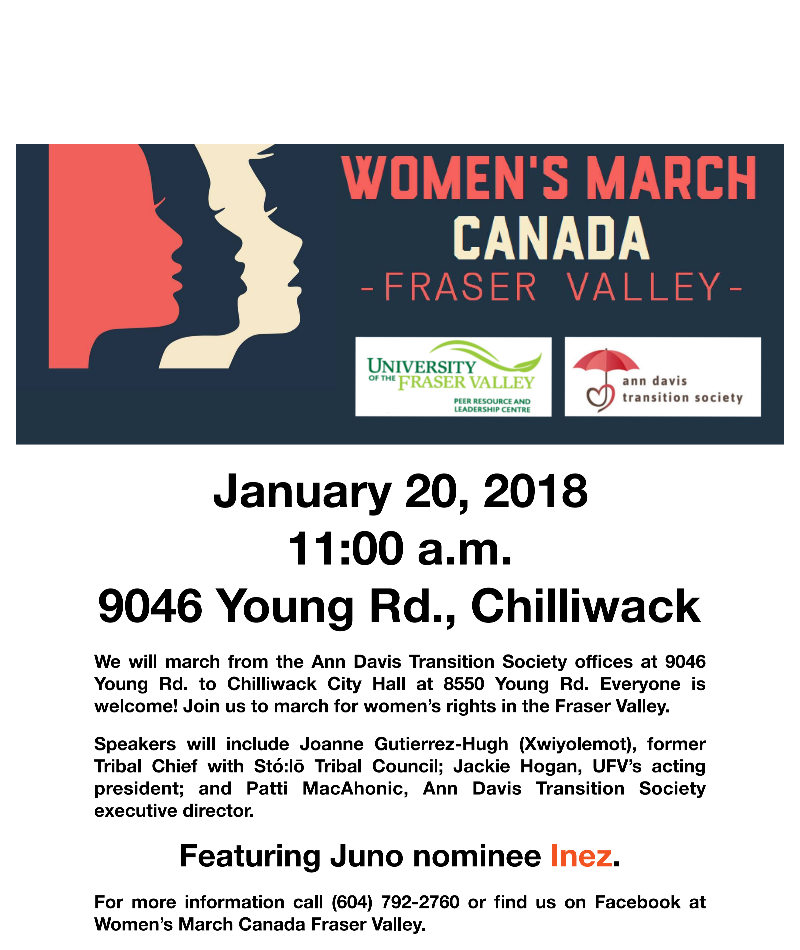 Honouring The Women Killed In The 1989 Montreal Massacre