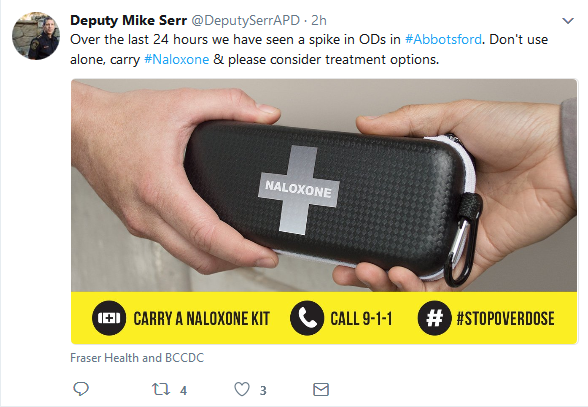 Abbotsford – There were five fatal overdose deaths (in ten hours) in the city of Abbotsford between 10:15 AM and 7:20 PM on Friday. Needless to say, APD and Fraser Health, let alone the BC Coroner are rattled.
Of those who died, three men and two woman and ALL DIED ALONE. Four of the five died indoors. Add to the sadness and any stigma, perception or assumption, all the victims ranged in age from 40 to 67, according to Abbotsford Police Const. Ian MacDonald. These deaths were not in back alleys from young people, let alone happening in a crack house.

The mounting 2017 death toll from overdoses, which is already on a new record pace, to surpass 2016, show the dire need for awareness and recovery services.

No one is getting the message. Many are ignoring the warnings. Don’t be surprised if there are more OD deaths before New Year’s Eve.

The Coroner has yet to confirm if these are fentanyl or carfentanil related. Toxicology results are pending.

FVN has been approached by a handful of security guards who have told us that there may be a new drug called “Flakka”. This is a psychotic that reared it’s head in Florida in 2015. APD and RCMP both referred FVN to Fraser Health. Fraser Heath says they know nothing about it.

In 2016, Calgary and Abbotsford Police were warning about another drug called W-18, but since that story broke, no one is talking about that. The FVN story is here.

BC declared the opioid crisis a public health emergency in April 2016.