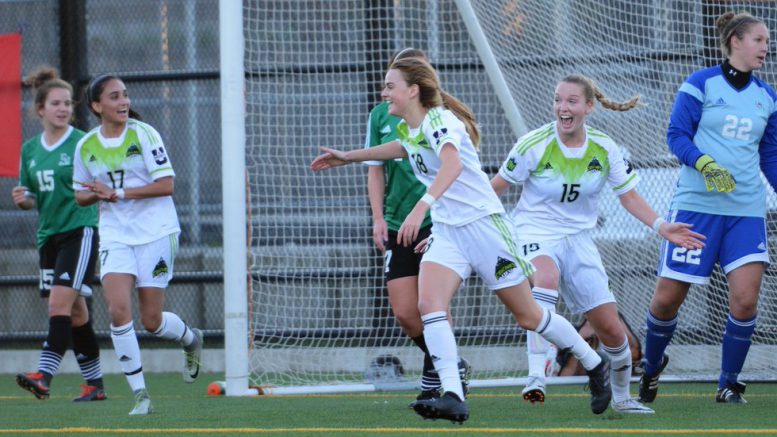 A tough third quarter was the difference on Friday evening, as the University of the Fraser Valley men’s basketball team fell 76-53 to the Victoria Vikes in exhibition action.

Playing at UFV’s Envision Financial Athletic Centre, the Cascades stuck with the Vikes over the first 20 minutes of the game – they were within 20-17 and 37-30 at the quarter breaks. The third quarter, though, was all UVic. The visitors built a 24-8 edge in the frame, and cruised from there.

The two teams meet again on Saturday afternoon at the EFAC, with tip-off set for 3 p.m.

“It was a great learning opportunity for us,” UFV head coach Adam Friesen said afterward. “We’re a youthful group, and we’re going to have to take some tough lessons. We played hard, we’ll learn from it and move forward.”

Cascades sophomore centre Sukhman Sandhu notched a double-double with 12 points and 10 rebounds, and Mark Johnson tied him for team-high scoring honours with 12 points of his own. Daniel Adediran gave the hosts a spark off the bench, scoring nine points on 3-of-4 shooting from the field.

Taylor Montgomery-Stinson paced a balanced UVic attack with 16 points, and Jordan Charles chipped in with 13.

The University of the Fraser Valley women’s basketball team picked up its first victory of the preseason, defeating the Victoria Vikes 72-60 at the Envision Financial Athletic Centre on Friday.

The visiting Vikes led by as many as 12 points in the first half, but the Cascades battled back to draw even, then accelerated on an 11-0 run early in the third quarter to seize control. The hosts led by double digits for most of the fourth quarter.

The two teams clash again on Saturday at 1 p.m. at the EFAC.

“I thought we started a little slow tonight – UVic really came out and dictated the physicality and pace of the game,” Cascades head coach Al Tuchscherer said. “But we responded to that, and I thought that was good. We made some adjustments to how we were approaching the game more than anything, and I thought we got a little bit tougher today. It was a good learning experience for our team, for sure.”

Shayna Litman excelled for the Cascades, racking up a game-high 23 points. Fellow starters Taylor Claggett (13 points, six rebounds) and Amanda Thompson (12 points) also scored in double figures, and rookie forward Katelyn Mallette came off the bench to post 10 points (3-of-3 from the field, 4-of-5 from the free throw line) and five boards.

The Vikes’ Amira Giannattasio counted a trio of three-pointers among her team-best 19 points, and Kristy Gallagher scored 12.

The Cascades’ big third-quarter run was the turning point, and Tuchscherer was pleased with how his team responded after halftime.

The Columbia Bible College Bearcats turned the tables on the University of the Fraser Valley men’s volleyball team on Friday, prevailing in three sets at the Envision Financial Athletic Centre.

The Cascades had defeated the Bearcats in three straight on Thursday night at CBC, but when the scene shifted to UFV’s campus for the rematch, the visitors were sharper. The Cascades kept the scores close in the first two sets, but the Bearcats were able to grind out a pair of 26-24 wins before polishing off the match 25-18 in the third.

The crosstown rivals both emerge from the first weekend of PACWEST play with matching 1-1 records.

“For whatever reason, we played very nervously,” Cascades head coach Kyle Donen analyzed. “We had some major struggles.

“It seemed like we had the mentality like, ‘We’re going to win at home,’ but you’ve got to earn every win that you get. I thought we were very careless in the way we played the game, and we appeared very surprised that a team that we’d beaten in three straight the night before was able to bounce back and do the same to us.”

The Cascades had some bright moments offensively at the start of the match, but struggled with their passing and with forming a solid block.

Left side Ben Friesen, a PACWEST all-star last season, paced the UFV squad with 10 kills, and Donen was pleased with how sophomore right side Graeme Hughes sparked the team defensively off the bench.

The University of the Fraser Valley women’s volleyball team wrapped up a weekend sweep of the Columbia Bible College Bearcats on Friday evening, prevailing in four sets at the Envision Financial Athletic Centre.

Coming off a three-set triumph at CBC on Thursday, the Cascades opened Friday’s rematch at the Envision Financial Athletic Centre by clawing out a 26-24 win in a hard-fought first set. The Bearcats leveled the match with a 25-17 triumph in the second set, but the hosts bounced back to take the third and fourth in decisive fashion, 25-17 and 25-18.

The Cascades improved to 2-0 in PACWEST play, while the Bearcats fell to 0-2.

“We battled to win that tight first one,” Cascades head coach Mike Gilray said afterward. “We had an entirely different starting lineup tonight, and I thought they battled hard for a win.

Sophomore middle Hanna Hieltjes sparked the Cascades off the bench, racking up seven kills on just nine swings. Rookie libero Karissa Marazzi also sparkled for the winners, posting a 2.25 rating on her passes.

The University of the Fraser Valley men’s soccer team turned in a solid performance on the road on Friday evening, but had to settle for a single point in a 2-2 draw with the UNBC Timberwolves.

The Cascades twice built one-goal leads, via Brady Weir and Gurmaan Jhaj, and head coach Tom Lowndes was pleased with how his team possessed the ball and carried the play for long stretches. The host T-Wolves, though, scored twice off set pieces to secure the tie.

“I’m really pleased with how we played with the ball,” Lowndes analyzed afterward. “We played some of our best football of the year. We passed it to death at times, and caused absolute havoc. We defended really well for 80 minutes, but we switched off on two set pieces and weren’t able to deal with the direct play that they offered.”

The Cascades opened the scoring in the 26th minute, when Weir and Spencer Williams turned a give-and-go into a breakaway that Weir converted for his team-leading fourth goal of the campaign.

However, the home side answered just six minutes later. Gordon Hall buried a header off a Dan Goodey corner, knotting the game at one apiece.

In the 62nd minute, Jhaj found himself open after a cross into the box from Charlie Lovell. He made no mistake for his second of the season.

The Timberwolves found some traction in the dying minutes and had a number of scoring opportunities, including a point-blank Brett Bobier header that was turned away by Cascades goalkeeper David Hicks.

In the 86th minute, UNBC’s Cheona Edzerza scored on a header off a Jonah Smith free kick, squaring the match 2-2.

Hicks made another great save in the dying minutes – Francesco Bartolillo’s header found the inside of the far post, but the UFV keeper was able to grab the ball off the line, maintaining the deadlock.

“For the last 10 minutes they were on the ascendancy, but over the first 80 minutes, if we take our chances, we’re up 4-1 and that second goal doesn’t matter,” Lowndes said.

“I’m really pleased with how we were with the ball. We showed some maturity, and we finally have an identity as a team. I’m happy with where this team is going.”

A classic tale of two halves on Friday evening saw the University of the Fraser Valley women’s soccer team and the Saskatchewan Huskies battle to a 2-2 draw.

At MRC Sports Complex, the host Cascades raced out to a 2-0 lead in the first half on the strength of goals from Amanda Carruthers and Janelle Henke. The latter 45 minutes, though, belonged largely to the Huskies, and they drew even on goals by Rebecca Weckworth and Leesa Eggum.

UFV (4-4-3) maintained fifth place in the Pacific Division, while Saskatchewan (5-2-4) sits second in the Prairie Division.

“It was that cliché about a 2-0 lead – it’s dangerous,” Cascades head coach Rob Giesbrecht said with a wry chuckle afterward. “But you know what, I can’t fault my girls’ work rate. They worked extremely hard for the full 90 minutes.

“We were fantastic in the first half – we scored a set-piece goal and we scored on the counter. Saskatchewan just came out with the bit between their teeth in the second half. We made a few mistakes – lacked a bit of composure defensively to deal with the pressure they were putting on us, and that hurt us.

“Any time you’re up two and you end up dropping points, it’s not the ideal situation. But I’m proud of the work. We walk off here with a point, and we get ready for tomorrow.”

The Cascades host the Regina Cougars on Saturday (5:30 p.m., MRC Sports Complex, Field 4) in their last home game of the season, while the Huskies visit the Trinity Western Spartans (5 p.m.).

Carruthers, a fifth-year forward who had missed three of UFV’s previous four games due to injury, sparked her squad in the first half. She opened the scoring in the 14th minute, getting her head on the end of Harneet Dadrao’s corner for her team-leading fourth goal of the season.

Just over five minutes later, Carruthers set up Henke for the first Canada West goal of the rookie midfielder’s career. Carruthers made a run down the left side to track down a through ball, and played it across to Henke, who was all alone in front of Sask keeper Kyleigh Vause and made no mistake.

After the break, the Huskies were a different team. They got on the board in the 58th on a strike from Weckworth from beyond the top of the box which went in just under the crossbar. Eggum leveled the score with her team-leading seventh of the campaign, taking a cross from Jessica Bradford just inside the penalty area and firing home a top-corner strike.

The Cascades found some traction over the last 10 minutes, but couldn’t find that final touch despite several dangerous forays. In injury time, the Huskies got away on the counterattack and generated a clean look for Eggum deep in the box. But UFV goalkeeper Emily Harold came up with a huge stop from close range to secure the draw.

Giesbrecht was heartened to see Carruthers and Henke find the net.

“Amanda means so much for us,” he said. “I’m trying to think of how many goals she’s had at that back post off corners. It just shows how brave she is, and how much of a finisher she is. And Janelle, even though she’s coming off an injury and isn’t 100 per cent, she’s so dangerous. What a bright future she has.”

Be the first to comment on "UFV Sports Friday – Hoops, Soccer, Volleyball"