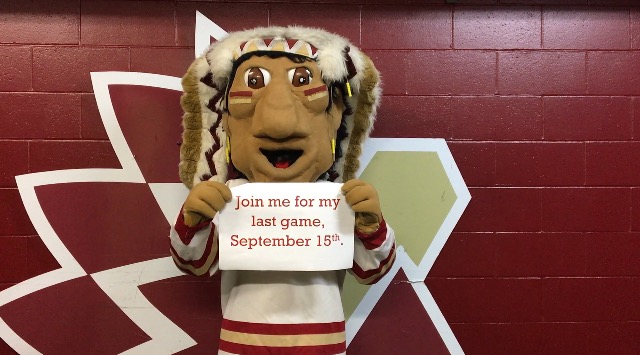 Chilliwack – UPDATE – Global TV reports that a new politically correct mascot will be introduced. Stó:lō Nation Chiefs Council David Jimmie was quoted as saying that he was pleased about the change.

ORIGINAL STORY – Chief Wannawin – the mascot of the Chilliwack Chiefs Hockey Club for more than 20 years – will make his final appearance at Prospera Centre on Friday, September 15 as the Chiefs host their Season Opening Game vs Langley Rivermen.  Fans of the popular character are urged to attend the game to bid a fond farewell to the retiring Cheerleader.

Chief Wannawin has been the Club’s biggest booster since the mid 1990s and since then has attended virtually every home game and many championship games including the Team’s appearance at the RBC Cup in Fort McMurray in 2000 and in Halifax in 2002.  In addition to games, the beloved mascot represented the Chiefs at countless community events, at schools and other Club functions where he was always the centre of attention, especially for children.

Several “face-lifts” over the years have helped him maintain his youthful and energetic appearance.  But time has taken its toll and has suggested that a new mascot and face of the Club take his place.

That new face will be revealed to Chiefs fans at the second home game of the season – on October 6.