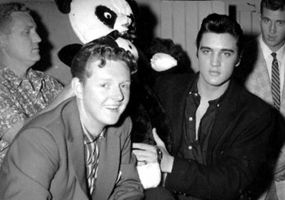 Vancouver – Happy Birthday Young Man ! Throughout Vancouver, the Lower Mainland and the Fraser Valley, everyone knows Red Robinson or at least, has a story about Red. A 16 year old kid in the 1950’s who broke ground by playing that rock n roll music that corrupts youth. Today, we call that Oldies radio. He introduced Elvis and the Beatles on stage at Empire Stadium. He influenced countless young broadcasters like me. Red is in the Rock and Roll Hall Of Fame in Cleveland. I worked with Red at a few stations including 650CISL and 104.9 OldiesFM/Clear FM. When I was 19, I started at CJVI Victoria (in 1979) and they were owned by Selkirk Communications. They also owned CKWX Supercountry 1130. Red was doing mornings at the time- then he was only 42. I would constantly ask Red and his Program Director Ted Farr for advice. To this day (I’m now 57) both still call me “kid”. I learned a lot from the “Red-man” and quite frankly, during a few dark times professionally and personally, he was always there for me.

Time to give back and simply say to my Radio Obi-Wan, my mentor….Thank You.