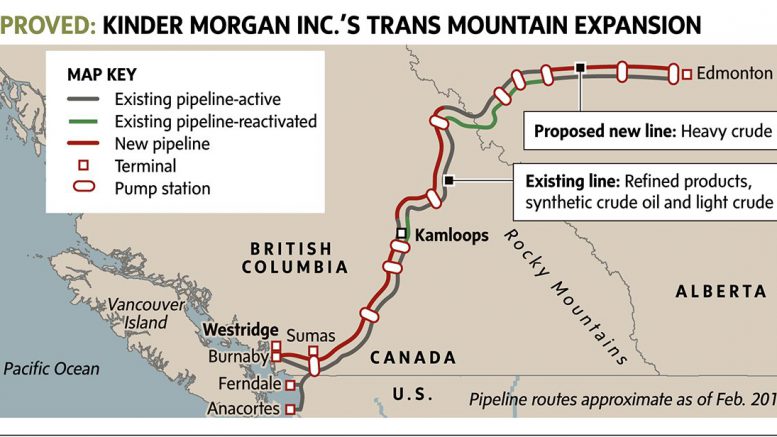 Victoria- – B.C. Environment Minister Mary Polak announced that Victoria has granted provincial environmental approval for Kinder Morgan to twin their pipeline and triple the capacity of the Trans Mountain pipeline from Alberta through the Fraser Valley and onto  Burnaby.

Victoria has placed 37 additional conditions on the pipeline on top of the 157 issued by the National Energy Board in 2016.

B.C. was court ordered to hold its own environment assessment. This after a court ruling stating the Province could assign the matter on such projects to Ottawa’s NEB (National energy Board).

The $6.8-billion expansion would twin an existing route from Edmonton through the Fraser Valley to Burnaby, tripling Kinder Morgan’s oil capacity to 890,000 barrels a day.

If Kinder Morgan clears many more hurdles on the horizon, oil/bituman could begin flowing in the updated pipeline by late 2019.

The pipeline still faces fierce opposition from politicians and environmental groups from Metro Vancouver , the Fraser Valley and groups like the Waterwealth Project as well as First Nations.

The Province put out two media releases on this:

Ministers acknowledge that the National Energy Board has the primary responsibility for ensuring the project is developed, constructed and operated in a manner that is safe and secure, and protects people, property and the environment. The environmental assessment certificate’s 37 conditions are in addition to and designed to supplement the 157 conditions required by the National Energy Board.

These additional conditions respond to concerns that have been raised by Aboriginal groups during consultation undertaken for the project and address key areas of provincial jurisdiction and interest, such as: vegetation and wildlife, parks and protected areas, greenhouse gas emissions and terrestrial and marine spills.

A record of the factors that the ministers considered in making their decision can be found in the Reasons for Ministers’ Decision at: http://a100.gov.bc.ca/appsdata/epic/html/deploy/epic_project_doc_list_459_a_waa.html

Key additional provincial conditions for the project would require Trans Mountain to:

The Environmental Assessment Office will co-ordinate compliance management efforts with the National Energy Board and other government agencies to ensure that the office is satisfied that certificate conditions are met throughout the life of the project.

“Today we issued an EA Certificate for the project, understanding that all inter-provincial pipelines are under federal jurisdiction. We have looked at areas where we can improve the project by adding conditions that will build upon those already established by the federal government.

“The Environmental Assessment Office recommended 37 new conditions be attached, to address concerns raised by communities and Aboriginal groups during its consultation. We have agreed to all 37 conditions, ensuring the project meets the high standards we demand in British Columbia.

“The conditions we have attached will make sure ongoing consultation with First Nations occurs and also provides further protection of wetlands, wildlife habitat and caribou and grizzly populations. They are all legally enforceable, and will help to minimize or avoid altogether potential issues within areas of provincial interest.

To learn more about the Environmental Assessment Certificate for the B.C. portion of the Trans Mountain Pipeline Project, visit: https://news.gov.bc.ca/releases/2017ENV0001-000047