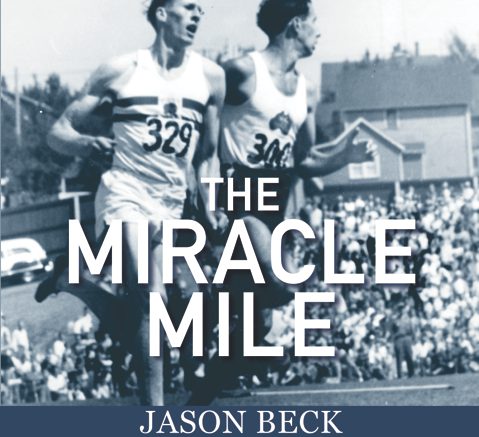 Vancouver/Fraser Valley -DECEMBER 16 UPDATE – The Miracle Mile: Stories of the 1954 British Empire and Commonwealth Games, was published by Caitlin Press in the spring.  Acclaimed by critics and readers, The Miracle Mile spent several weeks on the BC Bestseller list.

If you have a family member or friend on your Christmas shopping list who is interested in sports or BC/Vancouver history, The Miracle Mile is the perfect gift.  Filled with compelling stories of great athletes from around the Commonwealth and illustrated with over 150 rare historical photographs.  Hall of Fame sportswriter Jim Taylor called The Miracle Mile “a treasure chest”, Vancouver Whitecaps president Bob Lenarduzzi said “it’s as good as being there in person,” while world-renowned runner and athletics writer Roger Robinson called it “significant, compelling, for sure seminal, and maybe a masterpiece.”

If you are interested in purchasing copies this Christmas, you can get yours personalized by me through the BC Sports Hall of Fame, with proceeds supporting the Hall of Fame

Video of The Miracle Mile book launch, April 13th, 2016 at the BC Sports Hall of Fame: https://www.youtube.com/watch?v=SLI15lQQr68

OCTOBER ORIGINAL STORY – Jason Beck is the Curator and Facility Director at the BC Sports Hall of Fame and wrote a book published in April by Caitlin Press called The Miracle Mile: Stories of the 1954 British Empire and Commonwealth Games.

Did you know that the Vedder Canal played a major role in the 1954 Empire Games?

The book spent two weeks on the BC bestseller list.

For more information on the book, click here: http://caitlin-press.com/our-books/miracle-mile-the/