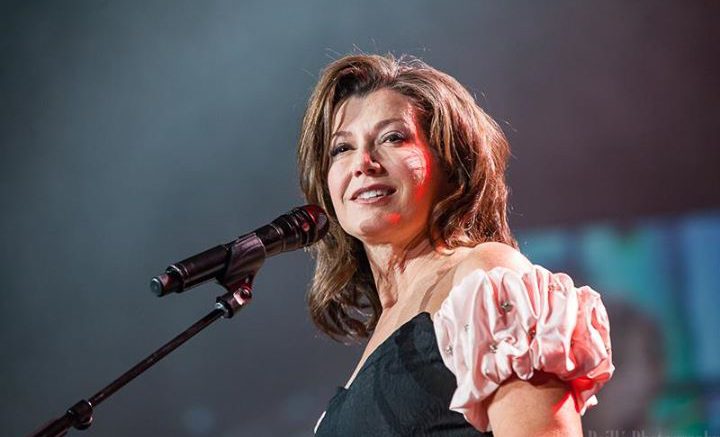 Abbotsford  (Review and Photographs by Tom Paille) – The Christmas season is officially underway in the valley with Friday night’s concert at the Abbotsford Entertainment Center. Michael W. Smith, Amy Grant and Jordan Smith brought a sold-out crowd a sample of new Christmas music as well as their much-loved hits. Amy and Michael are both established recording artists with multiple Grammy awards and have dominated the Christian music industry for years. It is a perfect blend for Christmas.

For Grant, ‘Tennessee Christmas’ is her first Christmas recording in over twenty years. The album has traditional Christmas songs on it like Joy to the World, White Christmas, and Baby It’s Cold Outside, a duet with husband Vince Gill. It also has some thought-provoking songs about loneliness and isolation during the season.. A little melancholy, but it’s a reality for many and she wanted to reach out to people that dread ‘the season’ because of dysfunctional family issues or no loved ones at all. “We all need people around us, to connect to us, love us. It’s what the holidays are mostly about”.

Michael W. Smith released his latest ‘The Spirit of Christmas’ back in 2014 and plays a selection that he dedicates to his Dad as it was a song they often sang together. He promised not to cry but it’s only been a year since “he went to heaven”. There were some not so dry eyes there. Set stage is set with a complete symphony orchestra as well as their Nashville tour band. The sound is excellent, the music in enchanting and the dialogue and stories in-between numbers recall memories and emotions that fill the arena with a warm glow.

After a few numbers, including an ‘impromptu’ snowball fight and Christmas-lit hula-hoops, Jordan Smith is introduced as the not-so-secret special guest. He enters shyly, smiles at the microphone and belts out ‘The Grinch’ in a voice that is jaw-droppingly good. His range and power show off his ‘The Voice, season 9’’ winning talents. His presentation is still a little stiff though. After an intermission, it’s back to the classics like Grant’s Breath of Heaven, Smith’s Overture/O Come All Ye Faithful and the beautiful instrumental ‘It’s a Wonderful Christmas’ which takes full advantage of the orchestral sound. Jordan Smith comes back for a powerful Silent Night. It’s stunning. It is so good that Michael, scheduled for the next song, says he doesn’t want to follow that and throws the audience under the bus instead with a couple of house-accompanying carols. The audience is more than willing, thrilled to be a part of such beautiful music. Amy agrees with the part about the audience being a big ‘part’ of their show. It’s about the connections, the sharing of time with friends and family and that is what Christmas is all about.

Be the first to comment on "Review – Christmas with Amy Grant, Michael W. Smith And Jordan Smith"