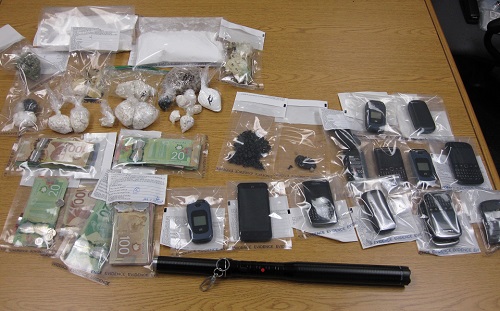 Chilliwack/Abbotsford/Langley – An alleged drug ring operating in the Fraser Valley was shut down following several arrests and the execution of search warrants by the Chilliwack RCMP.

The raids and arrests stem from the Chilliwack RCMP Crime Reduction Unit (CRU) investigation initiated after police received reports in February 2015 of a dial-a-dope organization allegedly involved with the sale of cocaine, heroin, and methamphetamine throughout the community.

On October 27, 2016, Chilliwack CRU officers executed a search warrant in the 34000-block of King Road in Abbotsford.  Four men were arrested by police who seized cocaine, heroin, methamphetamine, cell phones and approximately $20,000 in cash from the residence.  The men were later released from custody.

A second search warrant was executed on November 2, 2016 in the 6900-block of 207 Street, Langley, by Chilliwack CRU officers supported by Langley RCMP Drug Section where five men were arrested and cocaine, heroin, methamphetamine, approximately $12,000, cell phones and a handgun were seized by police.  The men were also later released from custody by police.

RCMP reminds everyone who witnesses anything they believe to be suspicious in nature to contact the Chilliwack RCMP at 604-792-4611, or should you wish to remain anonymous, call Crime Stoppers at 1-800-222-8477 (TIPS).