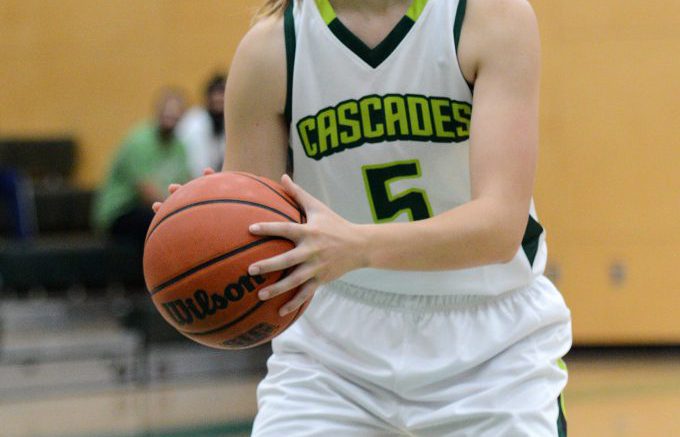 The University of the Fraser Valley women’s basketball team turned in a strong effort against one of the top teams in the nation, pushing the Regina Cougars to the limit in a 66-57 loss on Friday afternoon at a preseason tournament hosted by the University of Victoria.

The game was tied 57-57 with two and a half minutes to play, but Cougars fifth-year guard Katie Polischuk knocked down back-to-back threes to help Regina pull away in the late going.

Even so, Cascades head coach Al Tuchscherer was heartened to see his team go toe-to-toe with an opponent expected to be near the top of the U Sports national rankings when the regular season opens next week.

“It was a big step forward today, for sure,” Tuchscherer said. “Two things today – we played with effort for 40 minutes, and we learned to play with some toughness. It was good to see us rewarded for that, forcing a tough team to play really hard to beat us. And the second thing was, in the third quarter we executed some things (offensively) and got to some secondary reads. It was good to see us have some success with that as well.”

Fourth-year forward Shayna Litman continued her fantastic preseason, leading the Cascades with 20 points. Kayli Sartori, last season’s Canada West scoring champ, was coming off an injury and played just 20 minutes, but still managed 15 points. Tuchscherer felt that rookie Jessica Zawada (five points) played probably her most confident, complete game of the preseason, and he was pleased with the defensive spark that Amelia Worrell gave the team off the bench.

The Cascades wrap up the preseason on Saturday against the Calgary Dinos at UVic (12 p.m., CARSA Performance Gym).

Facing the defending national champions on the road Friday evening, the University of the Fraser Valley women’s volleyball team staged a stirring comeback before succumbing in five sets to the Vancouver Island University Mariners.

The Mariners claimed the first two sets in Nanaimo by scores of 25-17 and 25-20, but the Cascades came roaring back to claim the next two in decisive fashion, 25-17 and 25-16. The hosts fended off the Cascades in the final set, though, prevailing 15-9.

“The girls are know there’s stuff to improve on, but to show the resiliency to respond is huge,” UFV head coach Mike Gilray said, reflecting on his team’s comeback effort. “We just have to put teams in trouble from the start as opposed to having to fight back.”

Over the first two sets, Gilray felt his team was passing and running their offence fairly well, but were giving away too many points through errors, particularly at the service line.

In the third and fourth sets, Keira Fisher and Rachel Funk helped the Cascades turn things around at the service line, and Kelly Robertson came off the bench to spark the team from the left side.

“We definitely put them in more trouble in the third and fourth game from the service line,” Gilray noted. “In the fifth, it was just too many errors. We tried to have the perfect kill when we had lots of space to hit at on the court.”

Third-year middle Mandelyn Erikson was the Cascades’ player of the game on a night when UFV had some success in the blocking department.

“We had more touches on our block today than we did in our other games combined,” Gilray noted.

A fourth-set stumble cost the University of the Fraser Valley men’s volleyball team on Friday evening, as they suffered their first loss of the PACWEST season at the hands of the Vancouver Island University Mariners.

Both teams were undefeated heading into Friday’s clash in Nanaimo, and the host Mariners took the first two sets by matching scores of 25-17. The Cascades dug deep to win an epic third set 30-28, and appeared poised to extend the match when they went ahead 23-18 in the fourth.

But VIU, with Ryan Marcellus at the service line, reeled off five straight points to draw even at 23-23, and they earned four of the next six points to snare a 27-25 victory to close out the match.

“The first two sets weren’t great for us – we gave up a couple bad runs, and weren’t able to push back enough to bring it close,” Cascades head coach Kyle Donen summarized. “In the third set, we did the opposite – we limited their runs, and when we had our chances, we took advantage.

“In the fourth, we just couldn’t finish. It got away from us. We should be playing in the fifth set right now, but it just didn’t go down that way.”

Cascades fifth-year right side Joel Kleingeltink had a tremendous performance at the service line with eight aces, and he and setter Adam Frederickson combined for 11 kills. Left side Matt Whittall also had a strong outing, sparking the UFV squad off the bench.

“I hope it gives us a little bit of extra motivation,” Donen said, reflecting on how the less-than-24-hour turnaround offers his team the opportunity to respond quickly after a tough loss. “It’s a quick turnaround for both teams, and we used our bench a little more today. Both teams used a lot of energy tonight, but both teams are used to playing at these times, and we’ll have to bring that energy again tomorrow.”