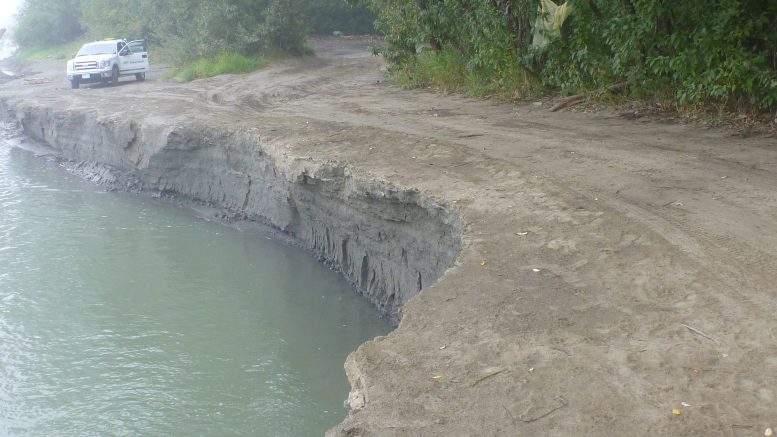 Chilliwack -SEPTEMBER 8 UPDATE – Old Orchard Road has now been closed to all vehicle traffic. FVN put out a query to the two MLA’s as well as the FVRD asking if any action will be taken to shore up the river bank. The area is in the jurisdiction of MLA John Martin. FVN did not hear a response from Martin’s office although FVN has learned that staff from the Provincial Ministry of Forests, Lands and Natural Resource Operations are in touch with City of Chilliwack officials to coordinate some type of action.

ORIGINAL STORY – SEPTEMBER 2 – Chilliwack City Hall has been flooded (pardon the pun) with complaints about the safety of a piece of Old Orchard Road, which has eroded and chunks have fallen into the Fraser River.

The access road along the river is dangerously narrow for vehicles to drive on.

The City doesn’t own that land. The Province of BC does. It’s Crown land.

Chilliwack Mayor Sharon Gaetz made a number of distressed emails available to FVN Fraser Valley News, showing the concern made by the City to the Province (including the two MLA’s) that a substantial amount of money and resources will be needed to shore up, the shore.

One of the email concerns reads:” On the east end of Old Orchard road adjacent to 8050 Old Orchard rd along the Fraser river there is a access rd. that leads onto a river bar which has been washing away alongside of an access rd. This washout is undermining the edge of road to a point that a vehicle could inadvertently roll over off the road and into the river by an un expecting motorist, a notice of the wash out or blocking the access road could be warranted to keep the public safe. Attached are photos of the affected area.”

Glen MacPherson AScT RTMgr | Director of Operations for the City of Chilliwack, wrote to the two local MLA’s John Martin and Laurie Throness: “Good afternoon John and Laurie.
I am forwarding you an email below that was sent to the Ministry of Forests district office in Chilliwack to make you aware of an extremely hazardous condition on Crown Land. The land in question is the Fraser River foreshore area that is accessed from Old Orchard Road on the north side of Chilliwack Mountain. The gravel road that is used by the public to access the foreshore for recreation is being scoured away by the river flow and currently it is dangerous for vehicles to pass – see attached pictures. The City has no authority to restrict public access to the river foreshore. We have however installed a warning sign at the Old Orchard Road access point advising the public to not drive vehicles onto the foreshore due to the dangerous condition. The hope is that the ministry will take action to close of this public access as soon as possible so that we do not see a vehicle slide into the deep and turbulent waters of the river at this location.”