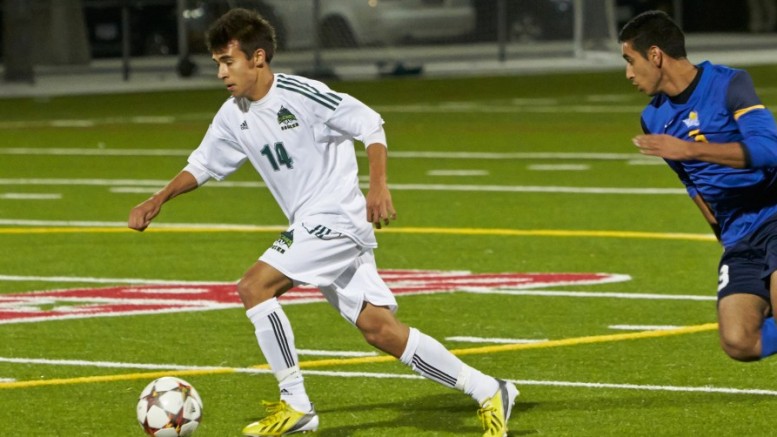 Abbotsford – The University of the Fraser Valley men’s soccer team turned in a strong performance against a quality opponent on Thursday evening, battling the Simon Fraser University Clan to a 2-2 draw.

Head coach Tom Lowndes’s side is now 2-1-2 in exhibition action, and they wrap up their preseason schedule on the road against another NCAA Div. II foe, the Seattle Pacific University Falcons (Saturday, 2 p.m., Interbay Stadium).

“To have a performance like that against a quality program like SFU, who year in and year out are at the national tournament and have a fantastic pedigree, was testament to just how far we’ve grown as a program,” Lowndes said afterward.

The Clan, indeed, are one of the top programs in the Great Northwest Athletic Conference – they’ve won four conference titles in the past six years, and are No. 1 in the GNAC preseason coaches poll.

The Cascades, meanwhile, have proven themselves among Canada West’s elite, with two conference bronze medals in the past three seasons.

SFU showed its quality early, forcing UFV on the defensive. The Clan’s Adam Jones broke the ice in the 10th minute, depositing a feed from Mamadi Camara in the bottom corner of the goal behind UFV keeper Alex Skrzeta. Skrzeta came up huge shortly thereafter, turning aside Michael North on a partial break down the left side.

But after the first 15 minutes, the Cascades turned the tide and had the better of the play for the balance of the half. Fifth-year midfielder Justin Sekhon drew the Cascades even in the 35th minute. He and SFU defender Pascal Schmidt came together in pursuit of the ball at the top of the box, and the ball ricocheted off Sekhon and made its way into the bottom corner behind SFU keeper Brandon Watson, who had been leaning the other way.

Sekhon nearly gave his team the lead moments later, but was unable to get on the end of a Nate Trampleasure cross for what would have been a sure tap-in.

Just before the first-half whistle, the Clan struck back on the counter-attack. Jones came slashing through the midfield on a dangerous run, but Skrzeta made a spectacular play to charge out and knock the ball away. Jones recovered the ball, though, and fed Camara for a point-blank finish.

Gurmaan Jhaj knotted the score once again just after halftime, making a run through SFU defenders and lacing a left-footed shot from the top of the box into the bottom corner.

The Cascades had a great chance to go ahead with 10 minutes remaining, when Sekhon lofted a quick throw-in over the head of SFU’s right back and into the path of Trampleasure, who was in alone down the left side. But Clan keeper Miguel Hof came out aggressively to stonewall the rookie striker.

Lowndes had post-game plaudits for Trampleasure, who has pushed for playing time as a true freshman, and for Skrzeta, who played all 90 minutes and registered seven saves. It was, in the head coach’s estimation, “the best game he’s had since he’s been with us.”

“From one through the 16 players that played, I don’t think anybody struggled,” Lowdnes asserted. “If we can put performances together like that consistently, I think we’ll be in for a very good season.”

The Cascades open the Canada West regular season against the Thompson Rivers WolfPack on Friday, Sept. 2, and host the UBC Okanagan Heat on Saturday, Sept. 3. Both games kick off at 8 p.m. at MRC Sports Complex Field 4.

Be the first to comment on "UFV Sports Thursday"