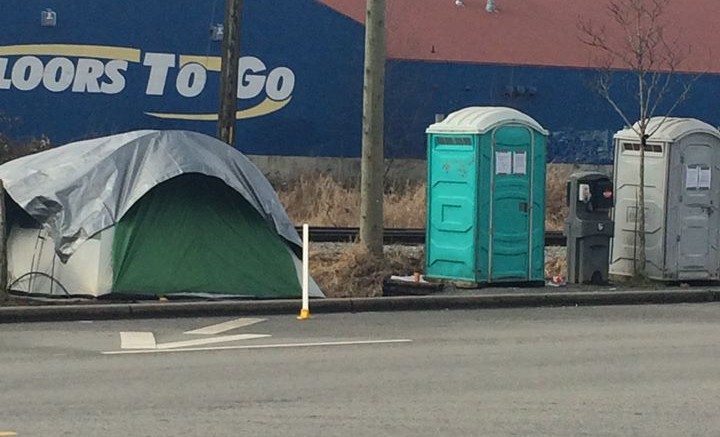 Abbotsford – Abbotsford has another homeless controversy. This time, it is the abandoned site of the now demolished MSA Hospital on McCallum Road.

Fraser Health Authority has filed legal paperwork to move the homeless camp who found a route around the fencing that was set up around the barren site.

Some 12 people are currently living there.

Fraser Health wants a permanent court injunction for the removal of the camp and to prohibit any further trespassing on the property.

Abbotsford Police Department (APD) have visited the site and asked the campers to leave, but officers did not perform any direct action to move them or their belongings.

The City of Abbotsford, let alone other jurisdictions are treading carefully here as court cases over the past few months have given the homeless campers various constitution rights that were brought before the BC Supreme Court.

The old homeless camp on Gladys Avenue, near the Abbotsford Alano Club and across the street from the MCC Centre was a lightning rod in the ongoing story. That included media being pepper sprayed by one of the campers.

Another camp was in the news when City of Abbotsford crews used chicken manure to try an deter squatters in Jubilee Park in 2013.

Chilliwack is going through a similar trying time with homeless living in a downtown city park situated between a funeral home and an elementary school. A camp under the Yale Road railway overpass was shut down by that city in 2015.