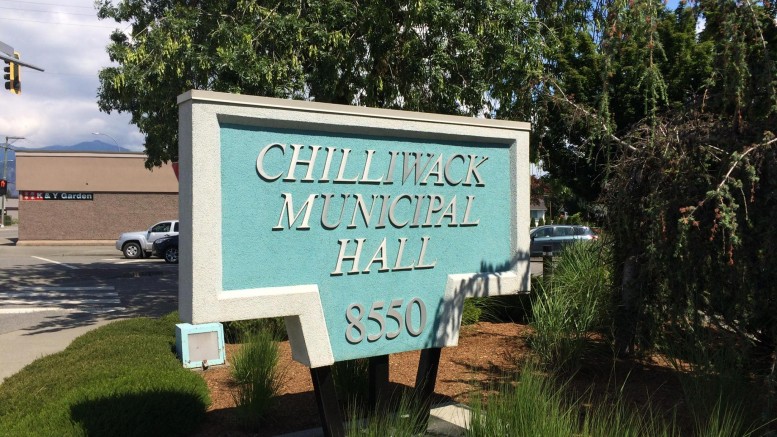 Chilliwack –  With a great seal of discussion, sometime rather tense, the City of Chilliwack approved the proposed memorandum of understanding with Kinder Morgan. This is in regards to the $1.2M funding of the Vedder Greenway Pedestrian Trail Bridge Project.
This was money that Kinder Morgan had set aside (with a time limit) for this project,as part of the “giving back” to the community of Chilliwack in anticipation of the possible (and likely) construction disruption that the city will see when the twinning project starts.
Councilor Jason Lum was quite concerned about optics. Would accepting the money be seen as an endorsement of the pipeline project.
That sentiment was echoed by Councilor Sam Waddington.
Liability issues from possible damage to property or the aquifer was also part of the tense discussion.
Speaking of optics, not one protester against the pipeline expansion, let alone any spokesperson from Kinder Morgan attended the afternoon council session.
The motion did carry with Councilor Lum as the only one opposed.
ORIGINAL STORY – On the heels of the public Kinder Morgan hearings on whether or not to twin the Trans Mountain Pipeline from Alberta through BC (Hope through the Fraser Valley and onto Burnaby) Chilliwack Council will have a controversial decision to make at their Tuesday afternoon session (3PM August 16).
The City docket states: Recommendation that Council approve the Memorandum of Understanding between the City of Chilliwack and Trans Mountain Pipeline L.P. for Federal funding in the amount of $1.2 million under the Community Benefits Program for the “Vedder Greenway Pedestrian Trail Bridge Project.
Originally this was $800 thousand towards the Vedder Greenway Pedestrian Bridge Project (valued at $1.2m) as part of their Community Benefits Program.
This is expected to pass.
Background from City Hall Meeting Agenda:
The National Energy Board (NEB) has now given conditional approval for the proposed Trans Mountain Pipeline Expansion Project to proceed. The Federal government has until December to
consider the granting of their final approval for the project.
If the pipeline expansion project does receive Federal approval then the proposed pipeline route will see pipeline expansion works within Chilliwack’s municipal boundaries. In order to compensate communities for any disruption or impact that may be experienced during the pipeline expansion works, Trans Mountain Pipeline (TMP) have in place a “Community Benefits
Program”. Through the program, funding will be made available to provide for a legacy project for the community. To participate in the “Community Benefits Program”, a memorandum of understanding (MOU) between the community and Trans Mountain Pipeline LP. is required.
Currently there are nine communities in BC that have signed MOU’s with TMP to potentially receive community benefits funding. Included are Abbotsford, Hope, Merritt, Kamloops,
Thompson Nicola Regional District, Barrier, Hinton, Clearwater and Valemount.
A full list of communities with signed MOU’s In place is attached for Council’s information.
In 2015, Council voted to not sign an MOU with TMP prior to NEB approval. At that time TMP offered to contribute $800k towards the Vedder Greenway Pedestrian Bridge Project (valued at $1.2m) as part of their Community Benefits Program. Now that NEB approval has been given staff have had discussions with TMP to revisit the subject of Community Benefits Funding for Chilliwack.
TMP are offering to enter into an agreement (MOU) to fund the full cost of the Vedder pedestrian trail bridge project at $1.2m.
Receiving the funding would seem to be an equitable contribution to the community for the disruption and would be consistent with funding being provided to other communities. The
Vedder River Pedestrian Bridge would be a welcome addition to the Vedder Greenway trail network and would allow the Vedder North and South side trails to be looped which is a major vision of Council’s Greenspace Plan. A copy of the proposed MOU is attached for Councils information.
RECOMMENDATION:
That Council approve the Memorandum of Understanding between the City of Chilliwack and Trans Mountain Pipeline L.P. for $1.2m Community Benefits Program Funding for the Vedder Greenway Pedestrian Trail Bridge Project and further; that the Mayor and Clerk be authorized to sign any necessary documentation.
SHARE TWEET PIN SHARE