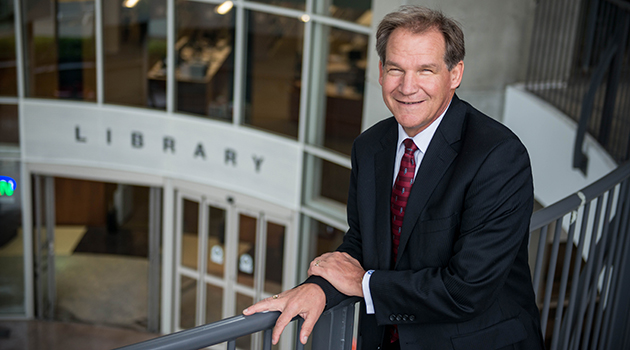 Abbotsford – Abbotsford CPA John Pankratz is the new chair of the Board of Governors at the University of the Fraser Valley. He succeeds Barry Delaney, whose term expired this summer.

Pankratz will be the 13th chair of the UFV Board, and the first who is an alumnus of UFV. He attended what was then Fraser Valley College for one year of study starting in 1979.

“John Pankratz is an excellent choice for Board Chair,” said UFV President Mark Evered. “He has been one of our most dedicated and engaged board members and it is evident that he cares deeply about UFV, its people and especially our students. I look forward to working with him.”

“I sincerely thank outgoing chair Barry Delaney for his tireless dedication and many contributions,” adds Evered. “He served as Board Chair for the past three years, but his volunteer work with UFV goes much deeper. Over the decades he led our Foundation, he served on key committees, and supported the Friends of UCFV initiative that helped us gain full university status,” said Evered.

A partner at Friesen Pankratz & Associates LLP, Pankratz entered public practice in 1986, and became a Certified General Accountant in 1988.

He has served his profession at the provincial level as the President of CGA BC in 2010.

Pankratz admired UFV’s development from a distance as he built his career and raised his family. Then when he was appointed to the Board of Governors in 2013, he became one of its biggest advocates.

“I am really enjoying this volunteer role at UFV because I get to look at the big picture and be involved in broad strategic planning,” he notes. “Often when an accountant volunteers we are asked to handle the financial side of things but here I have the chance to make an impact in many areas as I learn more about the university and the post-secondary system and contribute my own perspective and experience.”

He is a big believer in the power of education.

“UFV is a real asset to the Fraser Valley. It provides a strong local source for education where students can go and make something of themselves. Education really opens doors and improves options, and that’s good for the individual and the community.”

Pankratz assumes the responsibilities of chair at a key time in UFV’s history as it prepares to hire its sixth president, replacing Mark Evered, who plans to retire next summer.

“Maintaining continuity through the hiring and introduction of the next president is our biggest current challenge. It’s not just a case of finding the right person, it’s also ensuring that the transition is successful. I am on the committee to hire the new president and we have a very important task. We are all very involved and committed because we want to get it right. Mark Evered is leaving very big shoes to fill.”

Pankratz is well versed in UFV’s strategic goals and priorities and is enthusiastic about how the university has adapted to the rapid and significant changes in post-secondary, as outlined in its education plan, strategic enrolment plan, and UFV 2025 visioning process.

“Education as a whole is changing rapidly, and we are out in front in terms of adapting and leading the way forward.”

Pankratz is grateful for a post-secondary system that allows students to explore while they find their strengths.

He initially wanted to be a veterinarian, so took introductory science at UFV (then FVC). After deciding vet school was not in his future, he tried other courses, checking out philosophy, history and other disciplines. Then, while working in aquatics for the City of Abbotsford, he considered a career in municipal government, and was told that a business degree was a good route to an administrative job.

While studying upper-level business courses at Simon Fraser University he found that accounting courses were the ones he did best in. This inspired him to apply to the CGA program once he’d finished his BBA degree.

“I went into post-secondary with one intention, and emerged as an accountant at the end. I’m grateful for everything I learned along the way, and that the educational system allowed me the flexibility to explore different disciplines.”

In addition to his volunteer roles at UFV and with the CGA association, Pankratz has also been active in the community, as treasurer of the Valley Squadron of the Canadian Power and Sail Squadrons, on the board of finance for Bakerview Church, and as an examiner and area administrator for the Royal Life Saving Society.  He remains active as a board member of the Abbotsford Restorative Justice and Advocacy Association.

“I’m a strong believer in giving back to the community. Our communities need volunteers, but in order to be truly effective you need the time and ability to help others. You’re not in a position to give back if you’re not in a good place yourself. That’s why education is so important in community building.”

Pankratz and his wife Crystal are long-time Abbotsford residents. They enjoy spending time with their family, including two children and three grandchildren.

UFV’s Board of Governors includes members appointed by government as well as elected faculty, staff, and students. The board governs the management, administration, and control of the property, revenue, and business of the university. Serving with Pankratz for the 2016-17 term are appointed members Randy Bartsch (First Vice-Chair), Elyssa Lockhart (Second Vice-Chair), Len Goerke, and Justin P. Goodrich; elected UFV faculty and staff members Zoe Dennison, Rhonda Snow, and Manish Mehra; student members Sukhi Brar and Robert Pedersen; as well as UFV Chancellor Gwen Point and President and Vice-Chancellor Mark Evered. Several new members will be appointed this summer to fill additional vacancies.