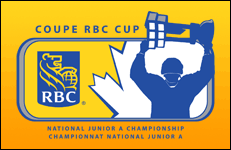 Chilliwack —With great anticipation, representatives of the Chilliwack 2018 bid committee announced that Hockey Canada has verbally confirmed Chilliwack will host the 2018 RBC Cup National Junior A Championship. Though contracts are yet to be signed, the local committee wanted to share the community’s ‘win’ and expressed its great appreciation to dedicated Chiefs hockey fans and Chilliwack businesses for their ongoing support.
Brian Minter, Board Chair of Tourism Chilliwack, said, “Our most sincere thank you to the entire RBC Cup bid committee for its creative and thoughtful presentation to the final decision makers of this important event. From a tourism perspective, we very much appreciate being part of this committee and the bidding process. Not only will this event bring a significant degree of prestige to our community, but the economic benefits will also be immense. We look forward to hosting this event with a high level of professionalism and community participation. It is a proud moment for Chilliwack.”
The RBC Cup is an annual ice hockey competition that determines the Canadian Junior A champion. It is played under the supervision of Hockey Canada and the Canadian Junior Hockey League. Royal Bank of Canada is the title sponsor of both the tournament and the RBC Cup championship trophy.
The bidding process to host the 2018 RBC Cup opened in October 2015. Representatives of Tourism Chilliwack, City of Chilliwack, Ts’elxweyeqw Tribe Management, Chilliwack Chiefs Hockey Club, and other local businesses, worked tirelessly to engage the Chilliwack community in preparation for the bid.
In an overwhelming show of support, Chilliwack residents took to social media to share with Hockey Canada that Chilliwack was ready to host the RBC Cup. Like-minded business owners and community leaders wrote letters of support for inclusion in the bid package.
“This is a momentous occasion for both the Chilliwack community and the First Nations community,” said Squiala Chief David Jimmie, President of the Ts’elxweyeqw Tribe and Stó:lō Nation. “In a spirit of unity and passion, residents, businesses, and community members came together for this bid and will continue to work together to produce an outstanding sports and cultural event.”
Following the successful bid, Chilliwack 2018 committee members credit the significant support from community leaders and local businesses and organizations for the success of the bid.
“We are grateful to Hockey Canada for the opportunity to host this world-class event and share with the rest of Canada the community our Chiefs have called home for over two decades,” Glen Ringdal, President of Chilliwack Chiefs Hockey Club and Prospera Centre, said. “I am excited by the partnerships we are developing in our community that, like in the success of our bid, will contribute to a successful and memorable Hockey Canada event.”
In studies of previous RBC Cup events, the estimated economic impact was $2.8 million in Prince Edward Island with $1.9 million occurring in Summerside, the host city in 2013; and $3.1 million in economic activity in Manitoba with $2.2 million having occurred in the City of Dauphin in 2010. Accommodations are one way this economic activity is generated. For example, Dauphin’s 2010 event resulted in 2,250 overnight stays. The City of Chilliwack eagerly anticipates similar results.
Chilliwack Mayor Sharon Gaetz said, “I want to thank the leaders of our City’s bid committee for their efforts and congratulate the people of Chilliwack on their part in securing this exciting event for our community. Hosting the 2018 RBC Cup presents an incredible opportunity for each of us to be involved in creating the economic and social benefits this championship will bring.”
Now, once the contracts are signed, the Chilliwack 2018 host committee will work to recruit volunteers to lead and support the coordination of ticket sales, travel and accommodations, team services and experiences, marketing and promotions, and of course the execution of the eight-day tournament.
Sports enthusiasts and community-minded individuals are encouraged to purchase game tickets, sponsorship packages, or to volunteer at the upcoming event. The framework for each of these processes will be released shortly.
The RBC Cup National Junior A Championship is scheduled to be held at Prospera Centre in Chilliwack, May 12-20, 2018.
SHARE TWEET PIN SHARE