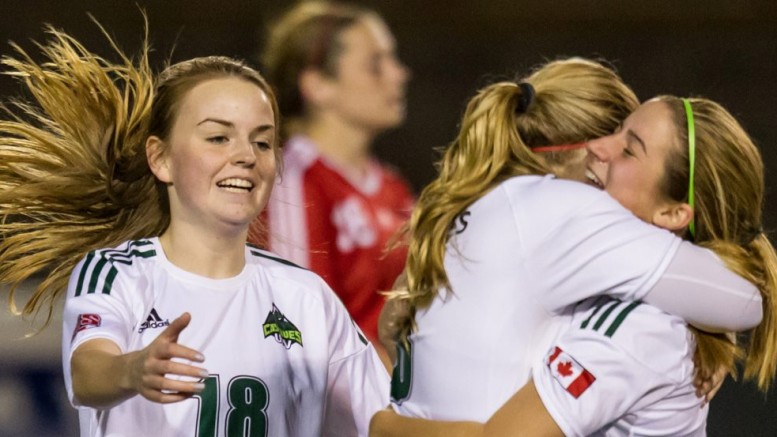 Fraser Valley – Shelby Beck of the University of the Fraser Valley women’s soccer program has been selected to represent Canada in the sport of futsal at the FISU World University Championship in Brazil this summer.

The tournament runs July 3-10 in Goiânia, a city in the central-western region of Brazil. Beck, a striker from Langley, B.C. who wrapped up her fifth and final season of eligibility with the Cascades last fall, is one of 12 Canadian Interuniversity Sport (CIS) players who will wear the maple leaf under the guidance of head coach Tino Fusco (Mount Royal Cougars).

Futsal is a five-a-side derivative of soccer which is played on a smaller field, generally indoors.

Selection to the CIS squad is a tremendous finale to Beck’s university athletic career, as she becomes the second Cascade to represent Canada at a FISU (Fédération Internationale du Sport Universitaire) championship. Golfer Aaron Pauls is the other – he participated in the 2014 World University Golf Championship in Crans-Montana, Switzerland, and the 2015 Summer Universiade in Gwangju, South Korea.

“It has been such a pleasure to play my five years of soccer at UFV and to end it with representing Canada is an honour,” Beck said. “I never thought I would get the chance to be able to represent my country and doing so feels like such an accomplishment. I hope that I can head over to Brazil and not only do myself proud, but make everyone at UFV proud as well. Coming back with a medal would be such a surreal way to end my university career.”

July’s event will mark Canada’s first-ever participation at the biennial FISU indoor soccer competition, which also includes a men’s draw. Since a women’s tournament was added in 2008, Brazil has claimed all four titles, including its most recent triumph in Málaga, Spain in 2014.

Over the course of her time with the Cascades, Beck emerged as one of the Canada West conference’s most dangerous offensive players. In 2014, she was UFV’s co-leader in regular-season goals with six, and helped the team to a Canada West silver medal and a fourth-place finish at CIS nationals. As a senior in 2015, Beck’s nine assists led the entire CIS, and she also notched two goals.

“We are so proud of Shelby,” Cascades head coach Rob Giesbrecht said. “She has worked so hard over the past five years, and representing Canada at the FISU tournament is a fantastic way for her to cap off her university soccer career. Shelby has a skillset that allows her to excel at futsal – her technical ability and vision will allow her to stand out at this competition. She’s a great example to other student-athletes who may not get the playing time they desire in their first few years. If you put the work in, the rewards will come.”