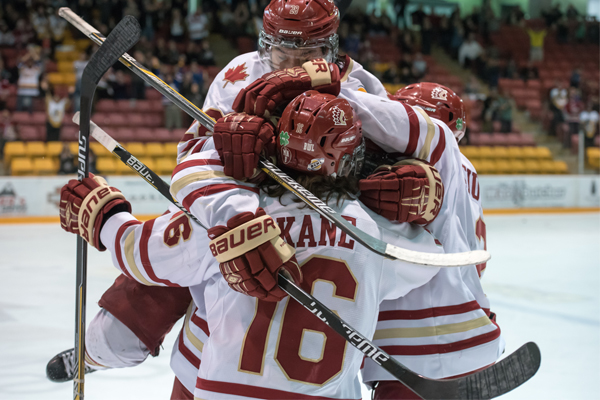 Chilliwack – Rarely can you describe a tight-checking defensive hockey game as entertaining, but every time the Chilliwack Chiefs and Wenatchee Wild get together it’s good hockey.

Kale Kane scored two goals including the last-minute winner as his Chiefs earned a 3-2 win and a 2-0 stranglehold in their best-of-seven second round BCHL playoff series.

The game was tight checking, but it was also fast paced, with the teams flying back and forth in transition.
Game two looked a lot more like this series was expected to be — two evenly matched teams going toe-to-toe with little to separate them.

The Chiefs scored the only goal in a fast-paced first period, with game one hero Vimal Sukumaran setting up Kale Kane for a power play snipe. Sukumaran grabbed the puck on the left wall and did half a lap of the offensive zone over to the right wall before feeding a diagonal pass back against the grain to Kane.

Camped by the left goal-post, the Quebec kid one-timed it from one knee, popping the puck past Wenatchee stopper Chase Perry.

Chilliwack’s led doubled 3:48 into period two on a goal by Dennis Cholowski.

With a small army of National Hockey League scouts watching, No. 27 in white uncorked a shot from the left point. The puck found its through two Wild defenders and one Chief camped in the crease. The puck seemed to hit one of Perry’s defenders on its way, and the goalie never saw it until he fished it out of his net.

Wenatchee answered that one less than two minutes later when Joseph Drabin went straight ahead of an offensive zone draw, found his way to the front of the Chilliwack net and punched the puck past Pelino for his first of the playoffs.

Wenatchee was held at bay for most of the third period, limited to shots from the outside.

The Wild were gifted a power play with 6:31 to go when Linden Hora was flagged for interference. But they couldn’t even threaten with the man advantage — their best chance was a Charlie Combs one-timer from the right wall that was easily managed by Pelino.

But in a one-goal game all the Wild needed was one lucky break, and they got it with 1:21 to go. Alex Bates wristed the puck on goal from the right point and Colin Buston deflected it past Pelino for his second goal of the series.

It looked like the game was heading to overtime.

But with 22.5 seconds remaining, Kane came through with the dramatic winner. Taking a pass from Jordan Kawaguchi, Kane scooted into the high slot and out-waited a Wenatchee defender. When the Wild player went down trying to block Kane’s shot, the 19 year old stepped around him and fired a dart past Perry, bringing the crowd to its feet.

Wenatchee called a timeout and pulled Perry for the last seconds, but they were cooked.

The Fortis BC Energy Player of the Game was Jeremy Germain.