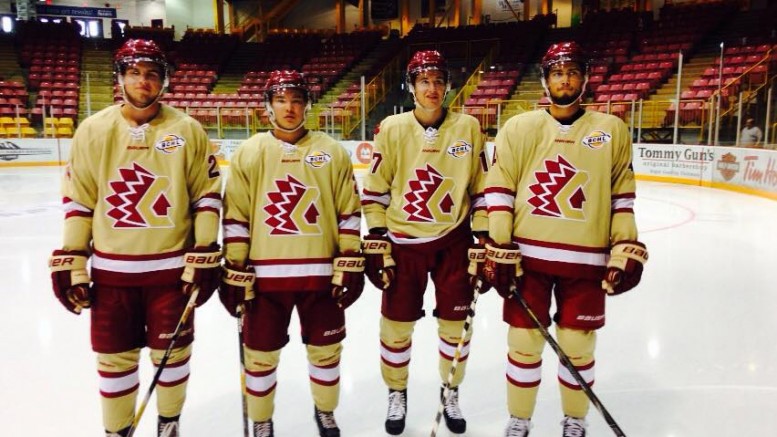 Coquitlam will want to burn the tape of this one-sided encounter as soon as possible.

The Express took their stifling defensive system that worked so well in game one and tried to make it even more boring in the early minutes of this one.

Where head coach Barry Wolff at least bothered to send one forechecker in the series opener, Coquitlam sat back with five in the neutral zone to start game two. The Chiefs responded by refusing to move the puck forward and boos rained down from the crowd.

The best way to force an opponent out of a defensive shell is to get the lead, and Chilliwack put two pucks past Coquitlam keeper Tyger Howat in the first 10 minutes.

Aaron O’Neill opened the scoring at 7:14 off a nice feed from Kale Kane. Kane danced down the right wing, side-stepped Express defender Nicholas Coltura and put a centering pass into the goal-mouth.

O’Neill made a slick move to the backhand, popping the puck past Howat for his first of the post-season.
Jake Smith scored Chilliwack’s second goal at 8:55 and O’Neill’s second of the game had the Chiefs up by three at 12:36.

After giving up two power play goals on two penalty kills Friday night, Chilliwack’s PK was tested late in the opening frame. Back to back minors to Darien Craighead (tripping) and Jesse Lansdell (roughing) had the Chiefs shorthanded for 3:58.

Pelino went post to post in a flash as Alex Kerfoot fed a pass across the goal-mouth to Green, stretching out with his right leg to make the save and keep Coquitlam at zero.

Seconds after the penalties expired, Vimal Sukumaran swooped into the Express zone and, from above the right faceoff circle, lazered a top-shelf shot over Howat’s blocker to make it 4-0 at the break.

Howat was on the bench to start period two, replaced by Lawson Fenton.

The backup held Chilliwack at bay until late in the middle frame when his team ran into penalty problems.

Back to back minors gave the Chiefs a five-on-three power play. Point man Dennis Cholowski skated into the slot and rang a wrister off the goal post. The puck settled in the goal mouth where Kane punched it in.

Jake Smith’s second of the game at 17:17, off a Ryan Forbes feed, gave everyone in the building two free cookies from Subway on ‘Score Six Saturday.’

A Dennis Cholowski snipe in the final minute had Chilliwack up by seven heading to period three.

Coquitlam lost its captain eight and a half minutes into the final frame when Jackson Cressey dropped the mitts with Olivier Arseneau. Both players were banished with automatic game misconducts.

With eight minutes to go, Sukumaran sparked a scrum when he delivered a high cross-check to Express forward Owen Stout. The most notable thing about the fracas was Howat the goalie standing up and reaching over the boards to smack Sukumaran with his glove.

Howat got an automatic game misconduct.

Coquitlam came out of it with a power play and wrecked Pelino’s shutout bid with a goal by Mitch Newsome.
Chilliwack’s eighth goal, at 13:42, was one that’ll haunt Fenton’s nightmares.

Jeremy Germain lined up to take a draw in the dot to the Fenton’s left and, instead of trying to draw it back, went straight ahead with a low shot that caught Coquitlam’s keeper completely off-guard.

Kohen Olischefski wrapped up the scoring with a late power play goal.

The Fortis BC Energy Player of the Game was Ryan Forbes.

This series resumes Monday and Tuesday night in Coquitlam.

Be the first to comment on "Chiefs Show Their Power In Game 2 Vs. Express (VIDEO)"