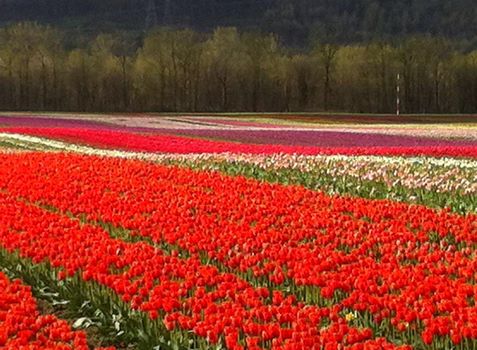 Agassiz/Seabird Island (With files from VanCity Buzz) – The 2016 Tulips of the Valley Festival has been cancelled due to a lack of location.

The reason, it’s a victim of its own success.

The annual tulip festival draws tens of thousands of people every year to Agassiz in the Fraser Valley, where brilliantly coloured fields of blooming flowers have been on display since 2006.

“We no longer have land on Seabird Island and were unable to find suitable land on which we could hold a tulip festival,” read a statement organizers Onos Greenhouse Ltd. on the Tulips of the Valley Festival website.

“We hope to be able to find some appropriate land so that we can hold our festival in the spring of 2017.”

That is the polite way of saying the local RCMP and other neighbours were upset with traffic problems.

The lands the tulip festival uses every year are owned by the Seabird Island Band.

As an alternative, tulip seekers can visit the neighbouring Abbotsford Tulip Festival, which starts March 25.