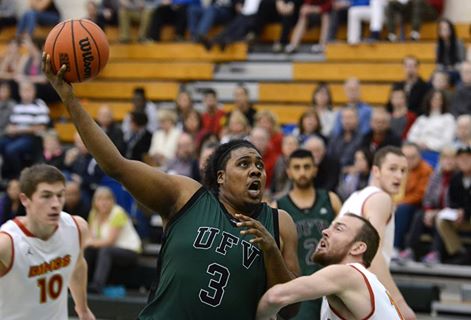 The Cascades built a 12-point lead at halftime, and after the hosts made a third-quarter push to cut the deficit to five, UFV responded with a 12-2 run in the final frame to drain any further suspense from the proceedings.

The Cascades led by as many as 18 points in the fourth quarter as they improved to 10-5 in conference play, thus extending their lead to three games over UBCO (7-8) in the race for second place in the Explorer Division. The two teams wrap up their weekend set on Saturday in Kelowna (7 p.m. tip-off, webcast at ufv.canadawest.tv).

“I was really happy with our performance – we haven’t been a great road team this season,” Cascades head coach Adam Friesen said, alluding to his squad’s 2-4 record away from the Envision Athletic Centre coming into Friday’s action.

“We’ve been talking a lot about what it takes to win road games and what we have to get better at. We still don’t defensive rebound well enough (UBCO had 16 offensive boards on Friday), but we only had eight turnovers and kept the crowd out of the game. It was a big step of improvement for us.”

Nate Brown led a balanced UFV attack with 18 points on 8-of-11 shooting from the field. Manny Dulay (16 points) and Vijay Dhillon (12 points) also scored in double figures, and Kevon Parchment finished within shouting distance of a triple-double with 14 points, nine rebounds and eight assists. Navjot Bains and Brandon Burke chipped in with eight points apiece for the Cascades.

The Cascades were the far more efficient team offensively, shooting 54.7 per cent from the field compared to just 34.9 per cent for the Heat, and their eight turnovers tied a season-low.

Brown, the Cascades’ fourth-year power forward who missed much of the first semester with an ankle injury, had his best game of the season as he continues to round back into form.

“His rhythm is definitely coming back, and the quality of shot that he’s taking and making,” Friesen said. “He’s probably playing as well as he has in his time here, in terms of being efficient and making his teammates better.”

The University of the Fraser Valley women’s basketball team turned in a tough-minded performance on the road on Friday evening, earning a 65-50 win over the UBC Okanagan Heat in Kelowna.

In a game with significant playoff implications, Sydney Williams sparked the Cascades off the bench with her long-distance shooting – the sophomore guard from Langley, B.C. drilled five of her 10 attempts from beyond the arc to account for all 15 of her points.

Canada West scoring leader Kayli Sartori tied Williams for team-high scoring honours with 15 points of her own, to go with 13 rebounds, six assists and three blocks, as the Cascades improved to 8-7 on the season. UBCO fell to 10-5.

The two teams clash again on Saturday in Kelowna (5 p.m. tip-off, webcast at ufv.canadawest.tv). UFV will be looking to gain more ground in its pursuit of the third and final playoff spot in the Explorer Division, which UBCO currently holds.

“We’re in full playoff mode right now. It was nice to get a win tonight, but we need to come back and get a win tomorrow. We have to compete every night.”

The Heat came into Friday’s action sporting some gaudy defensive numbers – they were allowing just 54.9 points per game, second-fewest in Canada West, and were forcing their opponents to turn the ball over a conference-best 24.7 times per game.

The Cascades managed to buck those trends, exceeding the Heat’s points-allowed-per-game benchmark by 10 points and surrendering just 15 turnovers.

Tuchscherer’s squad brought great energy on offence from the opening tip, moving the ball smartly and building a 20-12 lead at the end of the first quarter.

They stretched the advantage as high as 15 points in the second quarter, and took a 37-25 lead into the break.

But midway through the third quarter, UBCO went on a 9-2 run to cut the deficit to 44-36, all nine points in that stretch coming courtesy of Emily Kanester.

Williams’s fifth triple of the night pushed the lead back to 14 points late in the third, but the Heat kept chipping away. Sartori picked up her fourth foul with 6:19 remaining in regulation and headed to the bench, and on the ensuing UBCO possession, Kanester fired up a deep three-pointer with the shot clock winding down that found nothing but net, drawing the hosts back to within 54-46.

The Cascades, though, responded with an 11-2 run to put the game away, capped by a Shayna Cameron three-pointer off a Sartori assist.

Katie Brink scored 12 points for the Cascades, including several key buckets down the stretch, and Taylor Claggett hauled down 10 rebounds to go with seven points. UFV out-rebounded UBCO 50-38 for the game.

Kanester scored a game-high 18 points, but was the only Heat player in double figures.

Tuchscherer lauded the impact Williams made off the bench.

“I think Syd’s learning to take shots within the flow of what we’re trying to do offensively,” he said. “You can see that paying off, really, in the last three or four games. She’s doing what we need her to do.”

The University of the Fraser Valley men’s volleyball team encountered some early adversity, but responded emphatically en route to a four-set triumph over the Capilano Blues on Friday in North Vancouver.

The Cascades and Blues battled tooth and nail in the first set, with the hosts eventually grinding out a 29-27 win. The visitors, though, grew stronger as the game wore on and won the next three sets by scores of 25-17, 25-19 and 25-14.

“It was a weird game,” Cascades head coach Kyle Donen said afterward. “The first set was a little back and forth. I didn’t feel we played great in the opening set, and it was closer for that reason, and it was a good finish for them. But similar to our second game against College of the Rockies last week, we found a way to be better in the next three sets.”

Middle Dayton Pagliericci was a steady presence for the Cascades throughout, coming up with block touches to slow the Blues’ attack and contributing timely kills of his own. UFV was also buoyed by Isaiah Dahl’s return to the starting lineup – the sophomore libero had been limited due to injury over the previous three weeks.

“He felt comfortable, and did his job really well,” Donen said of Dahl.

The Cascades came in with a 2-7 record on the road – a sharp contrast to their sparkling 8-1 mark at home – and Donen said it was crucial for his squad to establish some success away from the Abbotsford campus.

In a game of wild momentum swings, the University of the Fraser Valley women’s volleyball team came out on the wrong end of a four-set decision against the Capilano Blues.

Playing at Capilano’s North Vancouver campus on Friday evening, the Cascades and Blues engaged in an epic first set which saw the hosts emerge with a 32-30 win.

Capilano rode that momentum to a 25-20 win in the second set, but UFV came out firing in the third, racing out to a 10-0 lead behind some scorching serves from middle Monique Huber. Huber, who was making her return to the lineup after an extended injury absence, racked up six aces in that service run alone, and finished with 11 aces for the game. The Cascades cruised to a 25-19 win to extend the match.

The fourth set was hard-fought, but the Blues scored the last three points to edge the Cascades 25-22 and wrap up the 3-1 victory.

The two teams came into Friday’s action tied for third place in the PacWest, but the CCAA No. 9-ranked Blues (10-9) inched ahead of the Cascades (9-10) heading into Saturday’s rematch (5 p.m. at Capilano).

“There were obviously some spots of brilliant play, but we were way too inconsistent,” UFV head coach Mike Gilray analyzed. “We had players who had big runs in serves, but as a whole team, we were far below our serving standard.

“It was a game where our inconsistencies and missing our standards in passing and serving hurt us.”

The Cascades were missing Rachel Funk due to illness on Friday, but fellow left side Kelly Robertson picked up the slack with 16 kills and 18 digs. Huber posted nine kills to go with her 11 aces, and libero Amy Davidson racked up 19 digs.

Gilray bemoaned his team’s boom-or-bust performance at the service line. The Cascades combined for 17 aces, but also missed 21 serves – four of them coming on set point in the first set.

Huber’s return was a boost, though.

“First game coming back, she was a big difference-maker for us,” Gilray said. “She brought some good energy to the court, but we need to surround her with more players joining in with consistent games.”