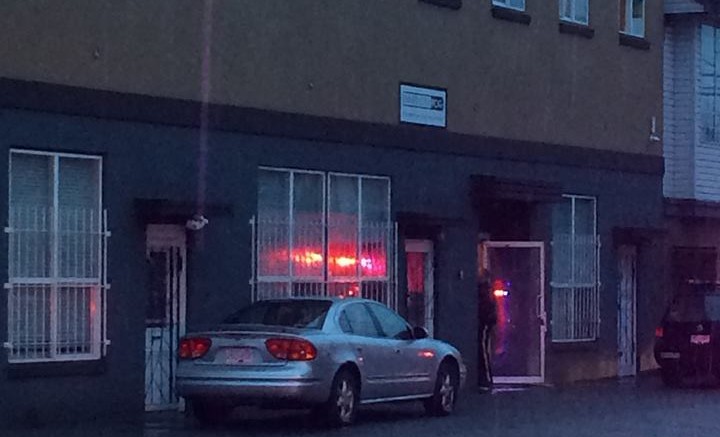 Chilliwack, BC – 7 PM Monday UPDATE – BC Coroner crew in white jump suits are in the building, looking for evidence. RCMP and IHIT have not commented.

4PM Monday UPDATE – Police tape was set up in front of a Nowell Street apartment just after 3:30PM Sunday afternoon. (Nowell between Princess and Yale was cordoned off.

RCMP released this statement on Monday January 18: Police are seeking the public’s assistance to identify a suspect in their investigation of the stabbing of a man on Sunday.

The investigation stems from a report received by police on January 17, 2015 at approximately 3:00 p.m. from BC Ambulance of an injured male in the 9300 block of Nowell Street. General Duty officers immediately arrived at the address where they located ambulance personnel conducting first aid on a 44 year old man from Chilliwack. The victim was transported to hospital by ambulance with life threatening injuries.
Police quickly cordoned the scene as officers from the Chilliwack Serious Crime Unit supported by the General Investigation Support Team and the Lower Mainland Forensic Investigation Section began the initial phases of their investigation into the incident.
“The investigation is in its early phases and officers are determining if the incident was targeted,” said Cpl. Mike Rail.
Police are urging anyone with any information regarding this incident to contact Chilliwack RCMP at 604-792-4611 or, should you wish to remain anonymous, call Crime Stoppers at 1-800-222-8477 FREE (TIPS).