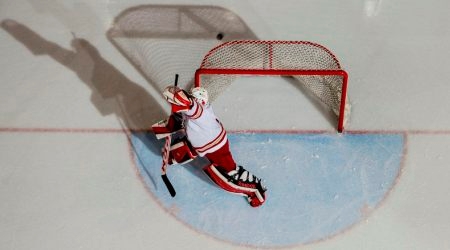 Kawaguchi and company were thwarted for most of the night by Trail netminder Bailey MacBurnie and their own knack for missing the net.

But Captain K came through when it counted and his crew improved their Mainland division leading record to 26-8-4-1. This game waited 27 minutes and 32 seconds for its first goal, which came on a Chilliwack power play midway through period two.

Connor McCarthy launched a slap shot from the top of the right faceoff circle. The puck clanged off iron and came to rest in the blue paint behind Trail goalie Bailey MacBurnie. Mitch Skapski got his stick on it, poking it across the line for his seventh of the season.

The visitors pulled even with just 11.7 seconds remaining in the middle frame, with Nick Halloran punching his ninth of the year past Chiefs stopper Aidan Pelino during a frantic goal-mouth scramble.

A scoreless third period led to overtime and a glorious opportunity for the visitors. Chilliwack was flagged for too many men, giving the Smokies two minutes of four-on-three power play time. Pelino came up with one glove stop and the penalty killers snuffed out the threat, setting the stage for Captain K’s winner.

Jesse Lansdell got the assist, tearing into the Trail zone, swooping behind the net and dishing a centering pass into the goal-mouth. In one motion, Kawaguchi popped the puck past MacBurnie for his team-leading 26th of the year.

The Fortis BC Energy Player of the Game was Aaron O’Neil.

Chiefs Explode In Third – Come From Behind Win In Langley