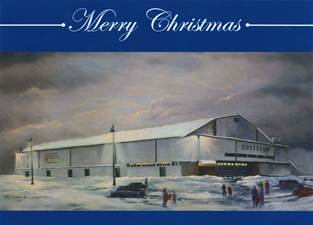 Chilliwack, BC – This year the City of Chilliwack decided to change its annual Christmas card contest to better capture the holiday by holding the contest during the Christmas season! In past years, contest entries were collected by mid-October to ensure the winning card was ready to use by Christmas. As it can be difficult to be inspired to create Christmas themed art during Thanksgiving and Halloween, the City changed the contest dates.

For the new contest, residents can now create artwork that expresses the holiday season in Chilliwack during the Christmas season. The contest is open from December 1, 2015 to January 29, 2016 and the winning entries will be used as the official 2016, 2017 and 2018 City of Chilliwack Christmas cards.

During the change in contest timing, staff chose artwork that had been submitted previously by Betty Champ. As this was not part of an official contest, she donated the image and will not receive financial compensation. The City would like to thank Ms. Champ for her generous contribution!

Her painting The Old Barn is the third in a series of landmark paintings that she is planning to create as her interpretation of Chilliwack in times past, but not forgotten.

Chilliwack Council Wrap – From Skateboards To ALR, To The Alano Club To A Change In Viewing Council Proceedings

Be the first to comment on "Chilliwack City Xmas Card"