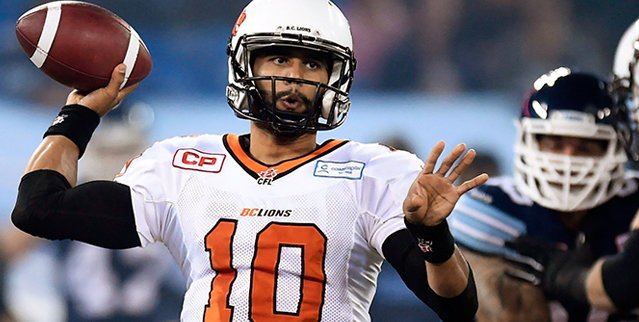 Toronto (CFL.ca) – Jonathan Jennings and the BC Lions are one step closer to securing a playoff spot after fending off the Toronto Argonauts in a 27-25 victory Friday night at Rogers Centre.

The Lions now move two games up on the trailing Winnipeg Blue Bombers in the West Division standings and two points up on the Montreal Alouettes who are looking for a crossover spot.

Jennings finished 21 of 33 for 259 yards, 2 touchdowns and 2 interceptions.  He leaned primarily on Lavelle Hawkins who had 6 receptions for 136 yards and a major.

Ricky Ray was making his first start in almost a year after taking over for Trevor Harris who despite having an MOP-caliber season, had struggled in recent weeks in losses to Calgary and Montreal.

Ray finished 26 of 38 for 227 yards, one touchdown and one interception.

Jennings was coming off an impressive performance in which he and the Lions handled the Hamilton Tiger-Cats at BC Place. After putting together two first downs, Jennings was picked off on his first possessions by DB Akwasi Owunsu-Ansah who’s fourth interception of the season stalled a Lions drive inside the Argos 30 yard line. The Lions defence would bail their young pivot out however and force the Argonauts to punt shortly thereafter.

On the Leos second possession Jennings would go right back at the Argos defensive back that picked him off a few plays before but this time would get the better of him. Jennings dropped back, with good protection, and delivered a strike down the middle of the field to Hawkins who had a step on Owunsu-Ansah. The 44-yard touchdown grab gave the Lions an early 6-0 lead in the first quarter (the 32-yard convert was missed).

After earning a quick two-and-out, the Lions offence went back to work with Jennings once again trying to stretch the field. A pass to Emmanuel Arceneaux earned a pass interference call which allowed BC a chance to extend their lead to 9-0 off a 28-yard Richie Leone field goal.

As for the Argonauts offence, Ray started to get in rhythm as the first quarter came to a close. He completed six passes, including an 18-yarder to RB Brandon Whitaker to help set up a 38-yard field goal from Jake Rogers who cut the lead to 9-3 with 1:15 remaining in the opening frame.

Rogers joined the Argonauts for their game against Montreal last week, which put them to seven on the season; a single-season CFL record.

Ray put together another solid showing on his next drive relying on Diontae Spencer and Anthony Coombs to put the Boatmen inside the BC 5-yard line but Toronto settled for a Rogers field goal.

The Lions would answer with a field goal of their own after a 35-yard catch down the far sideline by Hawkins helped put BC back up by six with 6:48 remaining in the half.

With time running down in the half, Ray marched the Argos into Lions territory by hitting Kevin Elliott on a slant for a 35-yard gain before gunning a throw into the endzone for newcomer Phil Bates. The pass was thrown into double coverage but Bates hauled in the pass and gave the Argos a 13-12 lead heading into halftime.

The major was Bates’ first reception as he started in place of Tori Gurley who was out for disciplinary reasons. The newcomer joined the Argos in mid-September on their practice roster after spending a pair of seasons with the Seattle Seahawks.

Ray finished the first half 18 of 23 for 179 yards and 1 touchdown. Toronto’s defence meanwhile held the Leos to just seven yards on the ground.

The Lions conceded a punt safety as the second half began after a holding call and an incompletion pinned them back.

Stuck three, Jennings and the Lions started to take advantage of some Argonauts miscues. Four penalties aided an 8-play, 56-yard touchdown drive which was capped off by a 4-yard pass from Jennings to Brian Burnham. Leone would miss the extra point but BC retook the lead, 18-15.

The Lions defence answered with a sack on Ray and then once again took advantage of great field position. A penalty on the punt, followed by three consecutive major foul calls on the Argos secondary deep in their own end gave the Lions an easy walk-in touchdown by Andrew Harris from a yard out. A two-point conversion pass from Jennings to Hawkins gave BC a 26-15 lead heading into the fourth quarter.

With the Argonauts defence battling field position and Ray still trying to shake the rust off, Toronto’s special teams would energize their squad. With Leone back to punt, DB Travis Hawkins came off the edge and blocked the kick, scooped up the loose ball and ran untouched into the endzone.

The special teams major cut the lead to 27-22 with just over 10 minutes remaining and momentum started to shift. Three plays later, Argos LB Thomas Miles forced a fumble with veteran DB Matt Black pouncing on it for the turnover.

A 13-yard run by Whitaker helped set up a 25-yarder by Rogers to put the Argos within two.

After holding their ground following a pair of Lions first downs, the Argos got the ball back with 2:56 on the clock. Scrimmaging from their own 9-yard line and hoping Ray could march them into field goal range. Despite getting one first down, the Argos elected to punt on third-and-six with 1:42 left.

Jennings took over and on second-and-10 calmly delivered a pass over the shoulder to Hawkins for a 36-yard gain. It set up a Leone field goal try with 1:02 remaining from 44 yards out but had it blocked.

With 33 seconds left, Ray looked to put the Argos in range for the win but his second down pass got tipped at the line and fell into the hands of veteran DB Ryan Phillips whose 6th interception of the year sealed the deal for the Lions.

The Lions now look to lock down the final spot in the West when they return home to host Calgary while the Argonauts look to improve on their seeding in the East when they host Winnipeg on Friday.