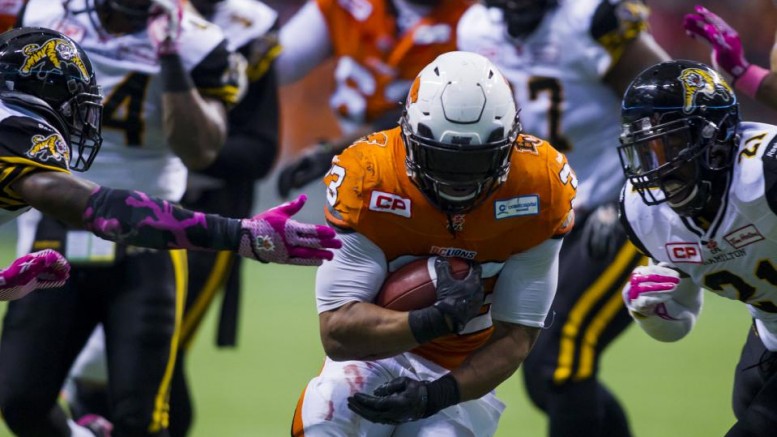 Vancouver (Yahoo Sports) – The B.C. Lions have had some of the CFL’s hottest and coldest moments this season, looking dominant at times and hopeless at others, and throwing away seven of their 10 fourth-quarter leads heading into Friday’s game against Hamilton. A big part of that success or failure has been about what their ground game’s currently doing, as star running back Andrew Harris led the league in rushing yards heading into this game, but had plenty of games this year where he was all but invisible (thanks to performance, playcalling or both). They were able to solve both issues against the Tiger-Cats Friday, coming up with a 40-13 win that had a lot to do with Harris’ remarkable fourth-quarter rushing performance to seal the deal. 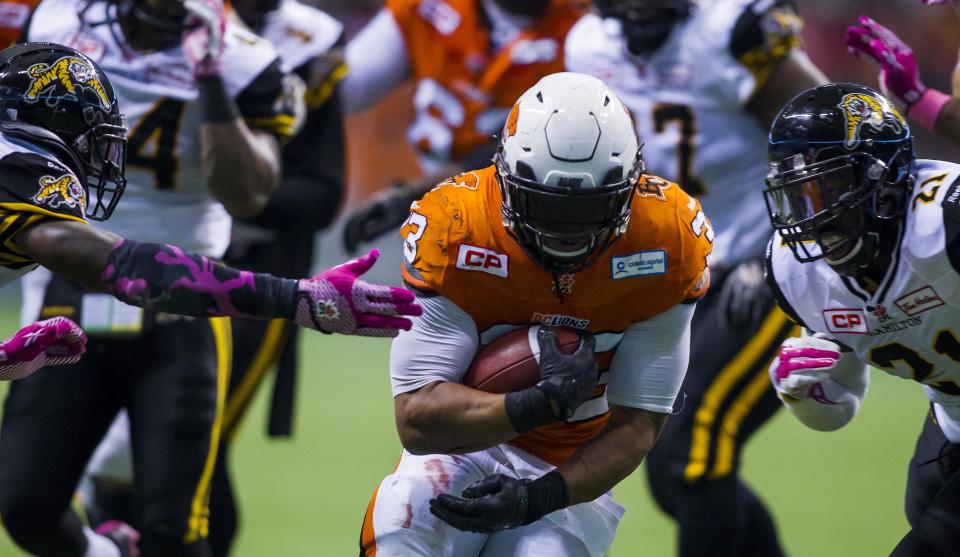 Harris was crucial in this game, finishing the day with 119 rushing yards and two touchdowns on 16 carries (an average of 7.4 yards per carry). However, most of that came late in the game, with Harris particularly doing well on one fourth-quarter drive, collecting 54 yards and a touchdown and killing a lot of clock along the way. He then had another great drive, including a third-and five conversion that put him over 100 yards on the night and set up another eventual touchdown. The Lions could definitely use more consistent production from him, but his late-game showing Friday was certainly impressive, and it suggests that they might be able to have a balanced offence going forward.

This wasn’t just about the ground game, though, as B.C. held a 24-6 lead at the half thanks largely to the strength of their aerial attack. Quarterback Jon Jennings completed 23 of his 33 passing attempts (69.7 per cent) for 247 yards and three touchdowns with one interception. He hit seven different receivers on the night, with Shawn Gore (five catches for 59 yards and a touchdown) and Emmanuel Arceneaux (six catches for 40 yards and a touchdown) leading the way. The Lions also got solid production from their defence, with Ryan Phillips notching two interceptions and the team combining for five sacks. It was a good all-around performance from B.C., improving their record to 6-10 and boosting their playoff chances.

Meanwhile, this was a step back for the Tiger-Cats. They seemed to have pole position in the battle for first in the East heading into this weekend, but this loss is a major setback. They’re still 10-6, and still in first for now (and Toronto’s 34-2 loss Friday helps to maintain that, keeping the Argonauts back at 9-7), but 9-6 Ottawa gets to play Winnipeg Saturday and can move into a tie with Hamilton with a win. The two teams play back-to-back over the season’s final weeks, so playoff positioning could all come down to that now. The Tiger-Cats could have held the edge with a better performance Friday, but now, they’re in a little tougher. We’ll see how they rebound against the Redblacks next week.

BC Lions Add Three More Coaches To The 2016 Staff