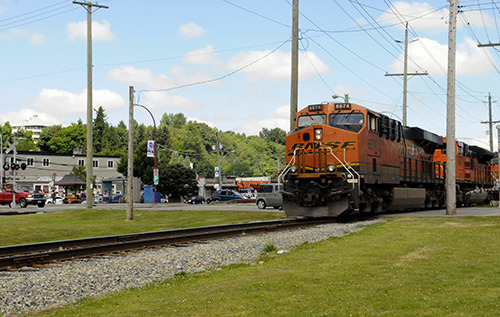 CN alleges it lost revenue and market share to CP after confidential customer contracts, pricing information and the corporate business plan were downloaded by an employee who then quit and accepted a job at CP.

In the suit against CP and the former employee, Greg Shnerer, CN is seeking an order stopping CP and its employees from using the information to solicit the business of any of the customers involved, a return of the “unjust gains” CP made as a result of the information and $2-million in damages.

CN alleges that a CP manager named Derek Ackford encouraged or directed Mr. Shnerer to download confidential information from CN’s electronic databases in the days before his departure, in violation of CN’s employment agreement. Mr. Ackford, a managing director at CP’s Toronto-area intermodal business, worked at CN until September, 2014, and is believed to be Mr. Shnerer’s boss at CP, CN alleges.

“Prior to his resignation and while still employed by CN, Shnerer acted in collaboration with Ackford to injure CN through unlawful means,” CN said in court filings.

This included “the unauthorized removal and use of confidential and proprietary information belonging to CN for the purpose of soliciting clients of CN,” CN alleged.

The allegations have not been proven in court. As of Friday, CP’s statement of defence had not been filed. Neither CN nor CP would comment. Mr. Shnerer, who remains a CP employee, could not be reached. Reached by phone on Monday, Mr. Ackford said he was not being sued by CN but could not comment further without first talking to his lawyer.

The lawsuit highlights the intense rivalry between the two companies, which between them control almost all of Canada’s rail freight business.

CP is run by Hunter Harrison, a former CN chief who has remade the once-sleepy company into a cost-cutting, aggressive railway. After CP enticed then-CN executive Keith Creel in 2013 to become its chief operating officer and heir apparent to the chief executive officer’s chair, the companies reportedly reached an agreement that would stop CP from recruiting 60 top CN officials. In exchange, CN dropped legal actions against CP over executive departures and benefits.

Toronto employment lawyer Stuart Rudner of Rudner MacDonald LLP, who is not involved in the case, said an employer suing an ex-employee who made off with confidential client data would have to show the court that the breach actually cost the former employer clients and revenue.

He said employers often seek to go after former employees who have jumped to the competition.

But such suits only succeed, he said, either when the ex-employee is violating a non-compete clause in their contract or is using confidential data from his or her old job to poach customers.

Mr. Shnerer, a CN employee since 2007, quit as CN’s national account manager in its Toronto-area domestic intermodal container business on July 3, 2015, to become CP’s director of regional sales and new business, according to CN and Mr. Shnerer’s LinkedIn profile.

According to an affidavit of a CN manager filed in court, an investigation of Mr. Shnerer’s use of his company-issued cellphone and computer found in the month before he quit that he downloaded, printed and forwarded to personal e-mail accounts several documents that contained information on current and prospective CN customers, including price information and contract expiration dates. His phone records indicated he was in contact with Mr. Ackford 52 times in June, the affidavit alleges.

“He left the employ of CN, taking with him confidential and proprietary information belonging to CN for the purpose of using it in the business of CP to unfairly compete with CN,” the company alleges in a statement of claim.

“The information which Shnerer removed from CN was and continues to be commercially and operationally sensitive in that it permits CP to directly compete with the rates and pricing offered by CN to its clients, as well as CN’s overall business strategy and plans in respect of future prospective clients and business,” CN said in the statement of claim.

CN did not say in court filings which customers’ information had been taken. The company said in court documents that it had not been able to read the texts Mr. Shnerer sent because his BlackBerry password is unknown to them.

CN is seeking a court order granting access to all computers, smartphones, memory cards and other digital storage devices used by Mr. Shnerer and Mr. Ackford.

Editor’s Note: An earlier online version of this article was incorrectly headlined CN Rail alleges corporate espionage in suit against CP, ex-employee says. This version has been corrected.

Be the first to comment on "Corporate Espionage Between CN and CP Rail?"