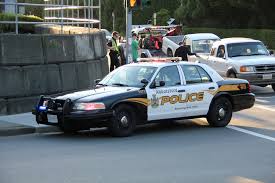 Abbotsford, BC – On Sunday evening (September 13, 2015 at 7:00 pm), the Abbotsford Police Department was called to the intersection of Gladwin Road and Harris Road for a reported Hit and Run incident. Upon arrival, APD Patrol Division officers encountered an injured 38-year-old man and his family. Police called for an ambulance for the man who was taken to hospital for treatment.

APD investigators learned that a red or burgundy-coloured suspect vehicle had been driving southbound along Riverside Road with other traffic. At some point, words or gestures were exchanged between the suspect in the red/burgundy vehicle and the victim who was a passenger in a grey Chrysler sedan. Both vehicles stopped just east of Gladwin Road on Harris Road. The suspect then approached the passenger side of the car and broke the window. He grabbed a cell phone out of the victim’s hand. The victim then exited the car and was struck by the suspect’s vehicle as it fled.

The victim is suffering from serious injuries in hospital. Major Crime detectives are looking to speak to any witnesses to this incident. They are also appealing to the other driver to come forward. Anyone with information should contact the Abbotsford Police Department at 604-859-5225, text us at 222973 (abbypd) or call Crime Stoppers at 1-800-222-8477.

Strange Overnight Pedestrian Death On Highway One In Abby