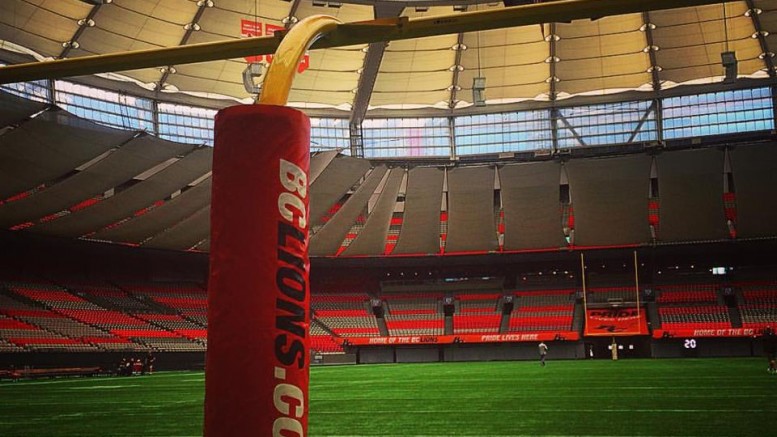 Johnson ran in from two yards out in the third quarter and 12 yards in the fourth to help Ottawa overcome an 18-14 first-half deficit.

The Redblacks (6-4) win moved them into a tie for second place in the East Division with the Toronto Argonauts. They also became the first Ottawa team to earn a win in Vancouver since Oct. 6, 1990. It was only the second win by an Ottawa club in the past 24 visits to Vancouver since 1974.

Redblacks quarterback Henry Burris completed 26-of-37 passes for 317 yards. Despite throwing a touchdown, Lions QB John Beck struggled to get much going in his first CFL start in place of the injured Travis Lulay (knee) and tossed two interceptions at critical points. Beck completed 20 of 29 passes for 207 yards.

Austin Collie, on a 14-yard reception, and third-string quarterback Greg McGhee on a one-yard plunge, scored touchdowns for B.C (4-6). Leone added a pair of converts, including a CFL-record 48-yarder.

Beck, a 34-year-old former NFL journeyman, got off to a rough start as a holding penalty on a punt return forced the Lions to scrimmage from their 12-yard line.

On his first two plays, Beck overthrew Shawn Gore on a long pass and was sacked before Leone conceded a safety.

Ottawa took a 5-0 lead on its next series as Milo kicked a 37-yard field goal. The Redblacks went ahead 8-0 at 11:24 of the first quarter after penalties forced them to settle for a 42-yard field goal.

A 12-yard field goal by Milo early in the second quarter put Ottawa up 11-0. The kick was set up by Redblacks defensive lineman Keith Shologan’s recovery of an Andrew Harris fumble on the final play of the first quarter.

The Redblacks countered with a Milo 18-yard field goal to go up 14-8. But Rainey returned the ensuing kick-off to the Ottawa one.

After two unsuccessful attempts to score under backup QB Jon Jennings, Lions coach Jeff Tedford sent in McGhee for his first CFL play on a third-down gamble which paid off for a touchdown.

Following a B.C. unnecessary roughness penalty, Leone’s record convert gave the Lions a 15-14 lead. Leone’s 39-yard field goal then put the Lions up 18-14 on the final play of the first half.

Milo’s fifth field goal of the game, from 48 yards midway through third quarter, brought the Redblacks within a point. Ottawa regained the lead for good late in the third on Johnson’s two-yard touchdown and Milo’s convert.

Antoine Pruneau’s interception set up Johnson’s second touchdown. With the Lions threatening late in the fourth, Jovon Johnson picked off a Beck pass in the Redblacks end zone.

Notes: The record convert distance resulted after the ball was snapped from the Redblacks’ 41-yard line, following the penalty, to the 48 for the kick. As a result of new convert rules introduced this season, the single-point attempt is usually scrimmaged from the 25 and kicked from the 32. … Beck’s father Wendell and mother Julie flew up from San Diego to watch his first CFL start. Their son became the 20th different quarterback to start a CFL game since 2013.