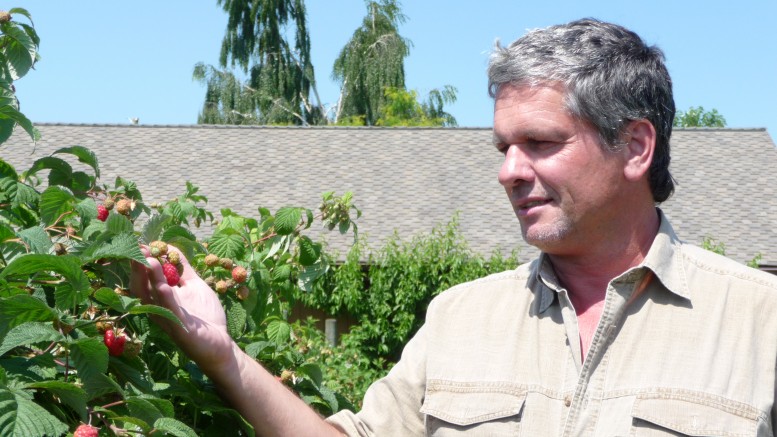 Fraser Valley – Tom Baumann of Expert Agriculture Team Ltd., also a Professor at UFV. Baumann will be a regular contributor to FVN on Agriculture. FVN is looking forward to your comments on one of the major industries in the region. Another contributor that you will see on the pages of FVN is long time Ag-reporter and Broadcaster, Grant Ullyott.

If we even had a winter (can anyone remember?), it sure was done early. The Haskap crop bloomed in February and early March and we started picking the first few fruit on the first of May with commercial harvest finishing by May 21st. Strawberries were starting to ripen in the fields in mid-May and commercial harvest began around May 25th with the first fruit stands popping up a good two weeks prior to normal. We picked the first raspberries in early June – unheard of! Blueberry season also started commercially in mid-June to late June rather than the same in July.

So why is that? Looking at the weather records, the trend was not terribly unusual. We had enough rain; some months were a bit drier, some normal or a bit more; we had some serious wind storms and beginning in April we had some nice big thunderstorms with hail, heavy downpours, lightening and thunder! Temperatures, however, were ever so slightly higher and we didn’t have any cold spells after temperatures started to rise in February, despite the odd radiation frost overnight when there were clear skies above. As a result, plants started growing roots, and later above ground shoots, far earlier than normal. My fig tree normally doesn’t show bud swell until early May, but this year it happened in early April. We started out about seven weeks early because of relatively warm temperatures in January, February and March with April setting all sorts of records for many cities. Now we are told a medium to strong El Nino is parked in front of our coast and we should expect warmer temperatures out west for the summer too. It sure came to pass with spring turning to summer and summer turning to a California summer. Rainfall was near average, but May showed only 4 mm and June only 11 mm of precipitation at Vancouver Airport and even less elsewhere. This is seriously impacting the fire season, drought conditions everywhere and where irrigation is not available, crops are shrivelling up. Where irrigation is used, most apply appropriate amounts of water, some a bit too much, where root systems actually get reduced and soils remain too wet, which manifests itself in drying up of the top growth, looking like too dry a plant, triggering even further watering….

Specific to each crop at the end of June:

* Blueberry: Well into fruit harvest with excellent set of fruit. To date, no serious events and little damage from the frosts and hail, but now the heat is upon us. Possibility of smaller than average fruit and if temperatures keep increasing past 30C, we will see fruit get too hot and go brown, which makes them unsaleable. This will mostly occur in the Eastern Fraser Valley. Growers are irrigating where available, those without irrigation will have to rely on heavier soil holding capacity or will see a significant fruit size decrease.

* Raspberry: Buds developed unevenly from the get go (primarily in ‘Meeker’) and most plants looked a bit under the weather. However, later on, these laterals did grow out (with some help from the growers) while flowers were plentiful and the weather superb for the bees to work, meaning that the Eastern regions are furthest advanced. Currently, we are looking at a very respectable potential yield, but again the heat will have tremendous potential to damage that crop for heating the fruit up and it will stay glued to the receptacle and will be near impossible to harvest by machine. Early morning harvesting might help a bit.

* Strawberry: Growth started very late in comparison with the other crops as the root systems were not keeping up with the top growth. However, once the soil warmed enough, the plants became more balanced and we had a decent crop despite big differences between fields and varieties. Cropping in the Eastern Valley started in late May and by mid-June was done already. Fruit size may have been a bit less than normal, but the sunshine really brought out the flavour and sweetness. Now we are waiting for the day-neutral crop to come on and we will once again have strawberry fruit on select farms till mid-October.

* Cranberry: Buds started to swell early and frost protection went on for a long time, essentially anytime we had clear sky well into May. No damage expected yet, but especially on dark organic soils, plants and developing fruit can heat up to the point where burns on the fruit will become visible.

Picking issues: aside from quality issues being a possibility, record crops are in the fields. Can we harvest them? As the seasons for all these crops are slowly melting together, we have every berry crop being harvested at the same time, making for a headache when it comes to:

* Capacity of machines on farms

* Freezer space availability, especially since we are harvesting 3 weeks early and three weeks’ worth of consumption is still in the freezers….