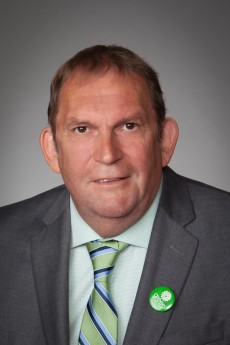 I was born in Mission, at the current hospital, but long before any renovations, in 1955.
My family is from Agassiz, my great grandfather having settled there, back in the mid 1800′s. My grandfather Art Green owned and managed the Shell bulk oil facility and later passed it onto my father Gerald.

It was back then, in my early years that I first got a feeling for the Riding that I am now running in, known as Mission/Matsqui/Fraser Canyon. Accompanying my father on his fuel deliveries to the Timber Sales up and down Harrison Lake and throughout the region, I became to understand the physicality of the area.

It was in the mid 1960′s when the demand for trucked fuels began to demise, that our family moved into recycling, and the shake and shingle industries. From retrieving railroad ties out of the Coquihalla, and re-floating cedar logs and manufacturing shakes and shingle out of Jones Lake, is where most of my practical education came from.

After graduating from Agassiz High School in 1973, on an Academic-Technical Program, where I had spent all 12 years of my schooling, I became a Dispatcher for the BC Forest Service, at Ranger District 3, in Harrison Hot Springs, where I received a vast amount of office training, and was given the opportunity to study forest management, protection, and silviculture.

It was after that phase of my life that I moved on to experience the oil and gas industries, mining, and eventually I settled back in the Fraser Valley to study Accounting and Office Careers at what is now known as Fraser Valley University.
After studying accounting, and a few years of H & R Block training, I began my own Financial Services Company known as The Green Shelters Corporation. This company is still in operation to this day, though, after being successfully accepted into IATSE, the motion pictures technicians union, it has strangely morphed into a Motion Picture Production Company, at which It is still operating to this date.

After years of being active in politics, mostly with the NDP, though my family was traditionally Liberal. I became dismayed with the Provincial NDP, and the general state of politics in Canada. I was tired of the double takes and flip flopping of the current leaders, and especially how they put the environment and future generations on the back burner.

As being raised with strong Christian values, stewarding our planet, it seemed to me, it wasn’t being attended to. As well, I was always raised that the pecking order was, people first, money second, and things third. I believe that this has actually reversed, and that simply isn’t acceptable.
It was only in 2013, after being with the NDP and losing the election to the Clark Government, that I moved to the Greens, who’s policies I’ve always respected, but always believed that their battle was too hard and too long.

It was an easy transformation for me, but I knew if they were ever to have any success, a new attitude must take place, and that attitude would have to start with me.

So since that day of joining both the Green Party of Canada, and the BC Greens, I’ve been relentlessly getting out the word. I’ve been writing to 9 newspapers a week, making contacts, attending meetings, and fighting the good fights. I’ve placed third party adds in newspapers, fighting the Northern Gateway Pipeline project. I personally contacted the CEO of Aevitas, and personally, with the assistance of local Realtors, aided him in looking for other locations for their Mercury Recycling plant. I’ve stood against the twinning of the Kinder Morgan pipeline. As well, I’m currently working with other proponents in finding and creating a national mental health and homeless strategy.

But most importantly, I’m not just an opposer, I’m a pragmatic problem solver. In 30 years as a Dept. Head in the Film Industry, I’ve always solved every problem that has ever been thrown at me, not once have I been skunked. It is this attitude I bring to the table. From being born into abject poverty, to becoming financially self-made, I don’t feel that there is any problem, that with the right assistance, I can’t solve.
I know we( the Greens), are a long shot. But I also know we have the strongest leader in Canadian Parliamentarian History, and if you, the electorate, give us a chance, even just 12 seats, we can turn this country around. Not only for us now, and the environment, but for all generations, as well as the economy, and for all people, all around the world.

NDP’s John Horgan, Now 36th Premier Of BC – Your Reaction