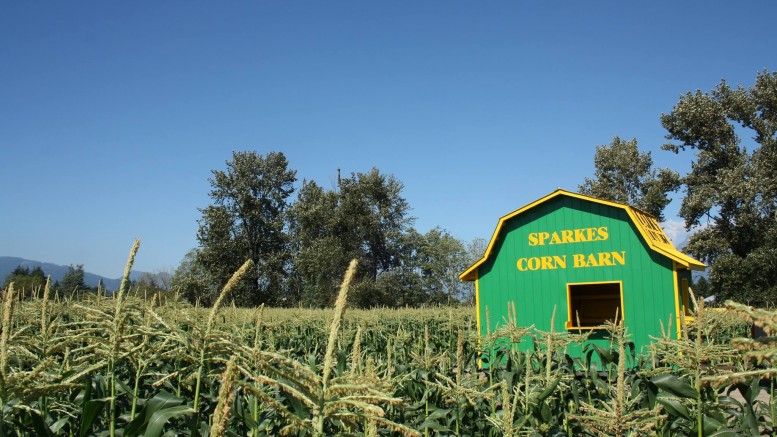 Chilliwack, BC (with files from Global) – This story is nothing new, but it is back in the forefront of many peoples minds. In 2013/14 Spectra Energy was replacing on of the original pipelines, set in place in 1972. The parallel pipeline did not need replacing. (Note: They’re required by the NEB – National Energy Board to replace a 2.4-kilometre section of their pipeline due to population growth.)

Their natural gas pipelines rolled through a swath of territory including the parking lots of the Chilliwack Superstore and Cottonwood Mall.

But in the past, Ian Sparkes of Sparkes Corn  was upset that field damage was caused by Spectra’s exploratory work through the corn fields and Sparkes claims the soil was permanently damaged. The crop yeilds have been minimal since that dig.

“I’m not against pipelines, I’m not a pipeline activist, we all need gas, but it needs to be done properly,” says the Chilliwack farmer.

Sparkes is one of twenty landowners that have been in a years-long legal dispute with Spectra Energy.

However, the farmers that would be affected aren’t voluntarily letting Spectra onto their land. Sparkes maintains his corn has never recovered after Spectra did work on the line in 2011.

“We’re in year five and there’s still no harvestable corn here. What’s the 16 acres that they’re going to screw up next year?” he asks.

“My rows are east-west, and the pipeline is diagonal, so it cuts through several plantings. It [impacts] irrigating, picking, cultivating, putting my tarps down. We’ll work around it, we’ll do what we can, but it’s going to be a big issue.”

A Spectra Energy spokesperson says work on the pipeline has been deferred for a year, and an agricultural specialist From Spectra (either professional agrologist or soil specialist) will be called in.

The NEB has always stated that they do not want to get into any compensation negotiation between Sparkes and Spectra. The are taking a fairly hands-off approach unless things become to heated but again, the entire process has been deferred.

As far back as 2011, Sparkes and another farmer, Gord Mitchell were critical of the NEB and question their public relations, considering all the other farmers, let alone Sparkes and Mitchell who are affected. Tom Baumann and Chilliwack City Councilor Chris Kloot are also among other farmers affected by this action. Baumann has told FVN that talks continue between all the affected parties.

All these farmers belong to a group called FVAPL Fraser Valley Association of Pipeline Landowners.

There are estimates that Spectra has spent some $2 Million in legal fees and the other farmers involved have dropped some $40 Thousand.

In a perfect world, before Spectra comes back in 2016, the outstanding issues from 2011, especially soil damage would be cleared up before any new work proceeds. It is hoped that regular reviews would be built into any new agreements.

That new work would be in the same affected farmland that became controversial in 2011.

Another meeting between all the involved parties is expected in September.