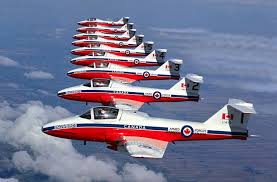 Air shows draw people from around B.C. and from out of province and boost tourism dollars in the local economies that host them. August is a great time to work an air show in your B.C. staycation plans. By visiting local events and venues, you’re not only supporting vital businesses in your town or city, you’re also helping to create jobs.

SkyFest is one of a number of air shows and announcements taking place in British Columbia in August:

SkyFest is on through Sunday at the Quesnel Regional Airport. Aside from aerial performances, it features a close up look at various aircraft and even vintage cars in its display area among other types of entertainment.

B.C.’s growing aerospace industry generates annual industry revenues of approximately $2.4 billion, value-added output (GDP) of $1.3 billion and employs over 8,000 people. Globally, 38,000 new aircraft valued at $5.6 trillion are expected to be needed over the next 20 years. In last year’s budget, the government committed $5-million over five years to develop and grow B.C.’s aerospace industry.

Aerospace is supporting the BC Jobs Plan by helping to keep the economy diverse, strong and growing. Since September 2011, the BC Jobs Plan has been building on the strengths of eight of the province’s key sectors using an educated and skilled workforce.

“We are excited to show our fans what we have in store for Quesnel’s international airshow – SkyFest 2015. This includes our first ever twilight show featuring an incredible pyro show and fireworks to end that nights’ display. We are also thrilled to have three Royal Canadian Air Force teams, the Snowbirds, The CF-18 fighter jet and the Skyhawks – The Canadian Armed Forces Parachute Team, as well as a complete lineup of civilian aerobatic pilots. August is definitely a busy month for aerospace in B.C. We are proud to be a part of it!“