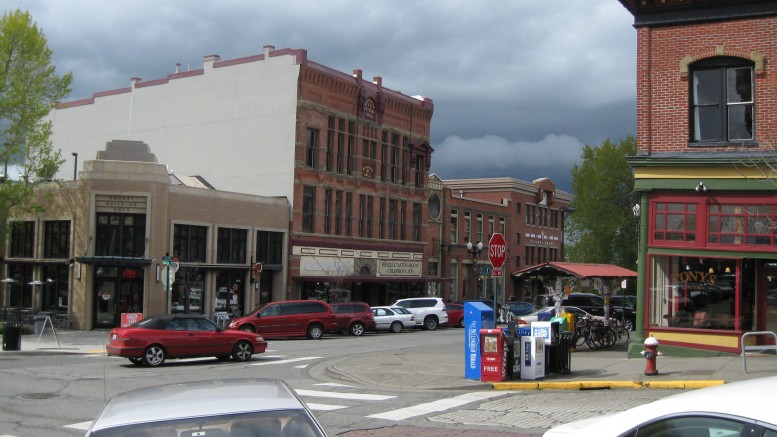 Bellinhgam,Wash. (Bellingham Herald) – As the Canadian dollar continues to weaken and cross-border shopping traffic slows, Bellingham’s economy appears to be getting a boost from local shoppers.

The number of people passing through the five border crossings southbound into Whatcom County totaled fewer than 1.3 million in June, nearly 200,000 less people than the same time a year ago, according to data collected by Western Washington University’s Border Policy Research Institute.

Having a million fewer people coming into Whatcom County in a six-month period is having an impact on Whatcom County retailers, particularly along Meridian Street in Bellingham. With more available parking spaces and shorter lines at gas stations, Whatcom County residents are finding a less-frenzied shopping experience and are taking advantage of it.

At the Best Buy store on Meridian Street, the decline in Canadian traffic has been steady, but the number of Whatcom County shoppers has steadily increased, said Travis Carter, specialty sales manager at the store.

“We haven’t had to make too many changes,” Carter said, noting that there are fewer people in the store overall, but not enough for the store to reduce work staff.

Tax receipts appear to be backing up the idea of increased spending by local residents. Overall retail sales tax revenue into the city of Bellingham through July is up 4.3 percent compared to a year earlier, said Brian Henshaw, finance director at the city. Tax revenue is a lagging indicator; the revenue that comes in for July is for sales that took place in May.

Nearly all of the retail categories are up year over year except for general merchandise, which incorporates many of the big-box stores. Some of the retail categories doing particularly well this year are ones that typically involve local shoppers, such as motor vehicles, vehicles parts and construction. Sales at restaurants are also up significantly.

“It really goes to the diversity of our retail economy that our numbers are relatively healthy,” Henshaw said.

The boost in local spending could be a result of a couple factors: A Whatcom County economy that’s seen some improvement and relatively low gas prices, said Hart Hodges, director of Western’s Center for Economic and Business Research. With the unemployment rate remaining under 6 percent and local consumers saving about $1 a gallon on gas compared to recent summers, it’s meant more money for discretionary spending.

One other factor that could be in play is an increase in visitors from the south. Many retailers have noticed more people coming in from areas north of Everett, said Guy Occhiogrosso, president of the Bellingham/Whatcom Chamber of Commerce & Industry. The recent influx of new stores in the area could be a factor in attracting those visitors, he said.

It also makes sense to Occhiogrosso that local spending is up because of the improving economy. One thing he’s noticed is many more people are switching jobs, which tells him that people are feeling more confident about the economy. A change of jobs also usually means a higher salary.

Still, general merchandise is Bellingham’s largest retail category, and an uptick in local spending won’t replace what the Canadians were spending when the loonie was near par with the U.S. dollar. The sales slide in that retail area has taken place over a 19-month period.

“We haven’t had to adjust the forecast, but (the general merchandise category) is a concern that is worth watching,” Henshaw said.

If the general merchandise category is to stabilize, it probably won’t come from Canadian shoppers in the short term. Last week the Canadian dollar was worth about 76 cents compared to the U.S. dollar. It’s the weakest the loonie has been in 11 years. Much of that has to do with the low oil prices, something U.S. consumers are benefiting from at the gas pump. The sluggish Canadian economy has also led to interest rate cuts, which also weaken the loonie.

Even with a weak currency, Canadians can still get some deals shopping in Whatcom County, but the deals just aren’t as good as in recent years. For example, a look at the Safeway sales fliers in Vancouver compared to the Bellingham Safeway flier indicate that items like chicken, two-liter bottles of Coca-Cola and Gatorade are less expensive in Whatcom County, even factoring in the currency conversion rate. Gas prices are still about 90 cents a gallon more in the Vancouver metro area compared to Bellingham.

In other areas such as hotel rooms and restaurants, it’s the Americans who can get good deals by visiting Canada. For Whatcom County residents, nearby Vancouver has become a more affordable big-city option with the stronger purchasing power of the U.S. dollar, said Occhiogrosso.

The weaker Canadian dollar does have one other potential positive for Whatcom County’s economy: increased Canadian investment. Occhiogrosso said with the sluggish Canadian economy, British Columbia businesses are looking for opportunities nearby, and the strong U.S. dollar is an attractive option, he said.

“For Canadian businesses, now is a good time if they want to enter the U.S. market,” Occhiogrosso said.

FortisBC Holds The Line On Rates